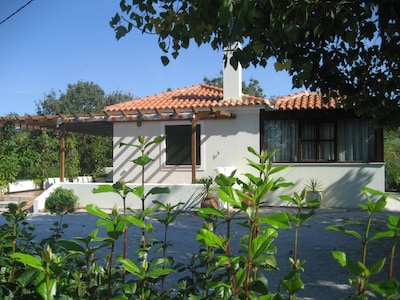 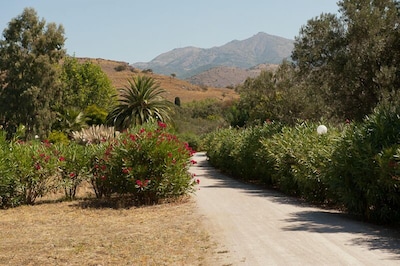 A relaxing Holiday in a beautiful appointed Cottage, situated in a verdant grove

Child bed (2)
This is the Den. It has two children's beds

Two bedrooms, one with large double bed and the other with two single beds. There is an extra room 'den' that has two small beds for children. This room can be made into another bedroom if needed. There is plenty of cupboard space in bedrooms and drawers.

The Krallis family can be found in Molyvos as early as the late seventeen hundreds. By the late nineteenth century they were part of a small circle of Greek and Turkish families involved in representing Molyvos to the Ottoman authorities and essentially running the village. The interesting blend of Greek identity with active participation in the Ottoman empire’s social and economic life can be seen in the folk art decorating the walls of the Krallis Mansion - currently in the stewardship of the Athens School of Arts - where images of Alexander the great stand opposed to whirling dervishes and depictions of Istanbul, the imperial center towards which Molyvos and more generally the Island of Lesvos were directed. After the incorporation of the Island in the Greek state in 1912 the family retained its prominent position in the village. In the mid-1920s Ioannes Krallis, father of the current owner of Molyvos Manor, built the power generator for Molyvos’ electric lighting. The little electricity factory close to the harbor provided the village with electricity till the late 50s when Molyvos became part of Lesvos’ grid. Still, the second world war and family deaths led the Krallis family to Athens in the late 40s. Today Stratis and Nana spend six months a year in Molyvos and the rest of their time at their home in Athens. Their sons Dimitris and Yiannis live in Vancouver, BC and Athens.

The cottage was built by Stratis on 2003. It is nicely situated in the olive grove and surrounded by trees and a garden. It offers all the necessary amenities for those who prefer a self-catering property and not a hotel. It is very peaceful and offers a nice view to Molyvos Castle.