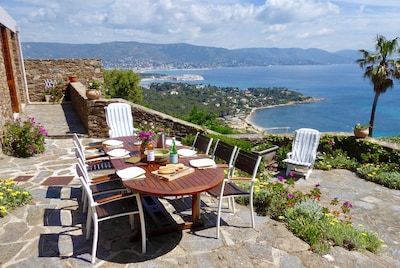 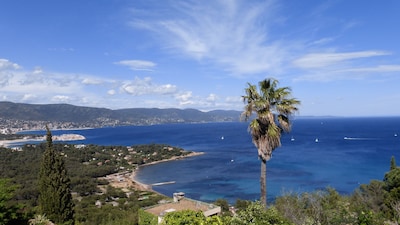 Bedroom 1 has twin single beds and a washbasin as shown in the photo. There is plenty of wardrobe space and the double glass doors look out to the wonderful sea view and lead directly on to the terrace. Bedroom 2 is a family room and can be divided into two by means of a sliding partition. There is a double bed in one side and 2 singles arranged as bunk beds in the other. This room also has double glass doors leading to the terrace and a sea view. There is a second window at the back of the room and ample wardrobe space.

The private gated domaine of Gaou Benat and Cap Benat is known for its wild, unspoilt countryside, clean sandy beaches and rocky coves.

The private sandy beach at Gaou Benat is safe for swimming with good snorkeling areas around the rocks. Sailing boats can be hired in the high season; tennis courts are available to rent all year. The West side of Cap Benat has especially fine sandy, gently shelving beaches . Cap Benat is reputed to have more days of sunshine than any other part of France (average in July and August is 28C with 12 hours sunshine a day!) and is famous in France for being the former location of the French President's summer residence at Fort de Bregancon.

There numerous bars restaurants and cafes to suit all tastes nearby in Le Lavandou and Bormes les Mimosas.

Villa Louise is well located for trips to St Tropez (35 Km), the Isles d'Or (Porquerolles and Port Cros nature reserve), Gorges du Verdon and for exploring the medieval villages in the unspoilt Maures Mountains such as Bormes-les-Mimosas. First class scuba diving is available nearby from Port de Bormes and also from Le Lavandou.

I live in a small village near Cambridge.

I have been coming here for many years and never get tired of the wonderful view and the very special location. Some renters return year after year so it's not just me who is addicted to the place!

What makes this villa unique

If you tear yourself away from the terrace and the amazing views there are lovely sandy beaches and tourist attractions to discover such as Bormes- les- Mimosas, Le Lavandou and St Tropez nearby.