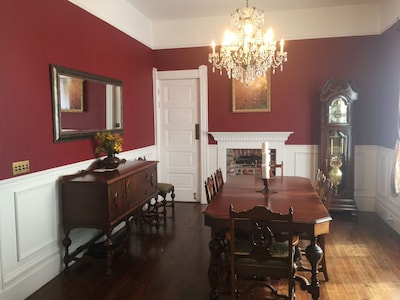 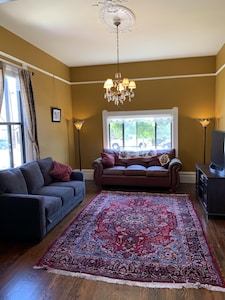 This Victorian grand home was built in 1896 and is loaded with all the character and charm from that era. Features include beautiful crown molding, picture rail moldings and 11' ceilings in the common rooms. Chandeliers with ceiling medallions also add to the charm. A bit of history of the house and area: The house survived the 1906, 1989, and numerous smaller earthquakes- apparently unscathed. Up in the attic, we discovered a network of small gas pipes which went to the gas light fixtures that were prevalent during that time, as the house was built just as electricity was becoming available in residential housing. The upper unit has the original coal stove surrounded by a beautiful mantle and decorative tile. It looks like in the 50's, the house was split into a duplex as was typical for that era. There used to be a street car line that ran down Encinal, in front of the house with a station a block over at Encinal/Chestnut. Note the link below for pictures. We're fortunate to have it. It is fairly typical of the houses built in that era. They certainly put money into them- in the day! Here is a site of old pictures of Alameda, including the old Encinal/Chestnut train station: https://alamedainfo.com/alameda-california-train/#bwg83/2087 https://alamedainfo.com/alameda-california-train We hope you enjoy it and appreciate it as we do!