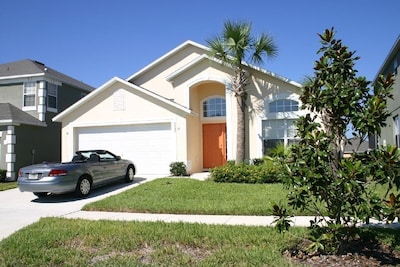 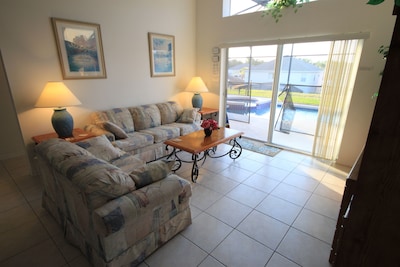 single (2)
with widescreen TV on wall

king
With luxury en-suite bathroom, walk in closet and safe

Air conditioning in all rooms. Master Bedroom has king sized bed with luxury en-suite bathroom + walk in closet with lots of hanging space. Ceiling fan. Has electronic safe for guests use. Plenty of drawer storage with mirrored unit, widescreen cable TV and bedside phone. Nightstands with lamps. Overlooks pool. there is a portable 'pack and play' cot in the closet. Queen Room also has en-suite bathroom with 2 nightstands, plenty of hanging and drawer space. Widescreen Cable TV Twin Room 1 has 2 twin beds. Disney Theme and Mickey Mouse TV. Nightstand with lamp Plenty of drawer storage and hanging space. Twin Room 2 has 2 twin beds, widescreen TV, Nightstand, Princess lamp, Princess Theme, plenty of hanging and drawer storage. There is a queen sleeper sofa in one of the living areas for extra 2 guests if needed.

I am a married mother with a son and daughter and a grandmother to two little boys and a granddaughter who absolutely love Mickey Mouse and visiting their special house in Emerald Island. My son in law loves the golf and we treasure the family times spent together at the house. The pool is always a huge hit with everyone, especially the children, and they also love the novelty of the games room.

Gillian Dunsdon purchased this House in 2005

We decided on Emerald Island mainly due to the fantastic location and proximity to Disney. We felt that Emerald Island was a very 'high end' Resort and were very lucky to be able to buy here. At the time the houses were selling before they had a chance to hit the market. We fell in love with the house partly due to the wow factor when we walked in, and its bright and cheery atmosphere. Since purchasing here, the location has only improved with lots more shops and restaurants opening on Rt 192.