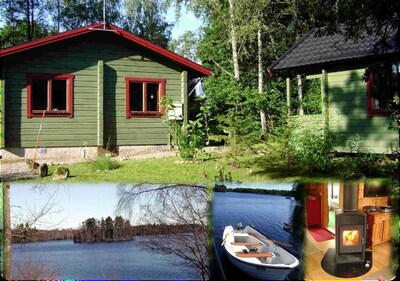 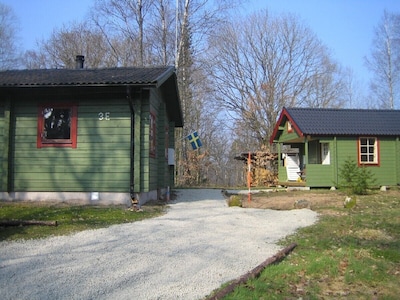 The quoted price is for booking the main house for up to 4 persons. Discount for 1-2 persons EUR 50 per week (Low season). Guest/sauna house (+3 pers.) is also available, making up to 7 persons, and costs EUR 100 per week all year . This includes unlimited free use of sauna. Use of sauna without sauna house booking is EUR 50/week. Rental includes additional costs (water, rubbish collection, electricity in main season), use of bicycles, use of the house's boat, as much fire wood as you require. Price does not include final cleaning EUR 40 (one charge per house) and electricity costs in intermediate/low season). Pets allowed with one-off extra cleaning charge of EUR 15. Deposit: EUR 100 per week, remainder 4 weeks before arrival.

Markaryd's commune in the south west of Småland is very popular with tourists because western and central Europe is just a one days ride away. There’s a good selection of attractions: how about an elk safari in 'Smålandet', where you can look out of your car into natural surroundings? If you like culture there are many historical churches, stone graves, open air museums and other attractions. The commune is also well known for its large railway museum in Strömsnäsbruk. If you’re a birdwatcher you’ll love the Store Mosse national park, where the newly opened nature museum presents all its own fauna and flora from Sweden’s largest moor south of Lappland. Småländ’s creativity has helped glass workshops like Kosta Boda and Orrefors to become famous throughout the world. Nowdays in a radius of only 80 km there are 14 glass workshops all known as the realm of glass. The area around Markaryd is a paradise for anglers and golfers.

Ask a question
Member Since 2006
Chris is a Premier Host·The owner or manager of this property consistently provides great experiences for their guests.