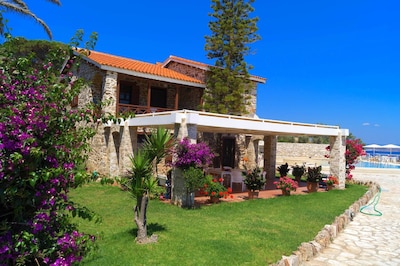 There is sea view from all the bedrooms. Bedrooms 2 and 3 have view to the swimming pool too.

1) In a 2 km distance from the residence , there is the fabulous temple of Poseidon. The temple of Poseidon at Sounion is one of the most important sanctuaries in Attica. Sporadic finds point to the conclusion that the site was inhabited in the prehistoric period. "Sounion Hiron" (temple of Sounion) is first mentioned in the Odyssey, as the place where Menelaos stopped during his return from Troy to bury his helmsman, Phrontes Onetorides. The finds of the 7th century B.C. are numerous and proove the existence of organized cult on two points of the promontory: at the southern edge where the temenos of Poseidon was situated, and about 500 m. to the NE of it, where the sanctuary of Athena was established.

2) A couple kilometre away from the residence there is a perfect place for hiking, cycling or just admiring the greek nature. That is the Sounio National Park. The National Park of Sounio was founded in 1971. It lies on the southeastern edge of Attica, in the area which is commonly called Laureotiki and ends up at the cape of Sounio. It is comprised of about 4,000 hectares, of which the 500 are the nucleus of the park where the established order of conservation is absolute.

There is the pine forest of pinus halepensis which is the prevalent vegetation of the park was (and to a certain extent continues to be) the most extensive and well-preserved pine forest of eastern Attica. The overland section of the area is an example of a Mediterranean landscape.

3) Lavrion port is 10 km from Sounio area. Ferries to the cycladic islands depart daily from the port. So you can take the ferry for a daily trip to Kea or Kythnos island.

4) Car is not necessary but if you would like to explore the extended area it is recommended.