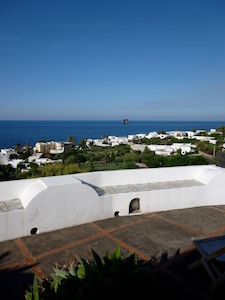 STROMBOLI - Lighthouse of the Mediterranean ». Mythical island where Rosselini lost his mind for Ingrid Bergmann, Stromboli is situated in the Tyrrhenean sea, between Napoli and Sicily. An active volcano of twelve square kilometres, it hosts on one side the tiny village of Ginostra and on the other side the harbour of Scari and the villages of San Vincenzo, San bartolo and Piscita. Stromboli belongs to the seven Eolian islands with Vulcano, Lipari, Panarea, Salina Filicudi and Alicudi.

Other Activities: Hikes on an active volcano. Sightseeing trips to 6 islands nearby (Panarea, Lipari, etc...)