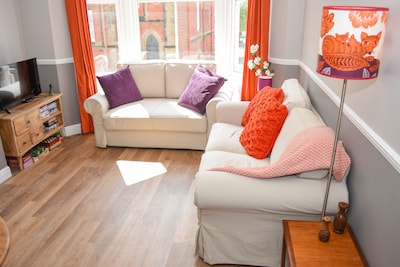 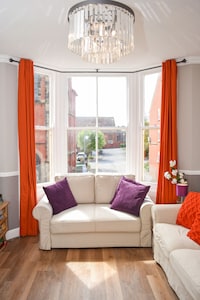 Family-friendly apartment near the sea.

2 bedroom apartment, within 5 minutes walk of two beaches and many restaurants.

single (2)
A side sea and castle view (in the distance) from here.

Sofa bed/futon
A sofabed in the living room, in case you need to spread out

Scarborough is situated on the east coast in the beautiful county of North Yorkshire. It’s divided into two bays – South and North – with the castle sitting on a high rocky promontory between the bays. The main shopping area is above South Bay with many High Street stores but also many independent shops (Homebird House being a particular favourite of ours) and a multitude of places to eat and drink. Whilst it is the largest holiday resort on the Yorkshire coast, even in high season if you wander off the main streets you can find lovely peaceful areas with fabulous walking and bird watching opportunities.

The South Bay was the site of the original early-medieval settlement and harbour, which form the old town. This is the main tourist area, with a sandy beach (which has sand even at high tide), lots of cafés, fish and chips and ice cream parlours and many amusement arcades. There’s also the Spa with great rock pools beneath at low tide and the Clockhouse Café with its fabulous view. Heading north from the Spa you’ll take in the whole of South Bay, pausing to admire the new RNLI lifeboat station, passing the harbour and ending at the small fairground at the far end of South Bay

Around the headland you’ll see North Bay with its huge expanse of golden sand (during low tide) this is the place to find some space and peace to make the huge sandcastle you’ve always wanted to! Further along North Bay you’ll find Peasholm Park, which in June 2007 was restored to its Japanese-themed glory, complete with reconstructed pagoda. For many years a mock maritime battle has been regularly re-enacted on the boating lake with large model boats and fireworks throughout the summer holiday season. The North Bay Railway is a miniature railway running from the park through Northstead Manor Gardens to the Sea Life Centre at Scalby Mills.

Northstead Manor Gardens also includes three other attractions: a water chute, a boating lake with boats for hire during the summer season and an open-air theatre.

Sandy Palms is perfectly situated for both bays with shops and many eateries within a few minutes walk too.

Whatever your age Scarborough has something for you and whether this is will your first trip to our lovely town, you’re a regular visitor or if you’re bringing your own children back after holidaying here as a child yourself, you’re bound to make many happy memories.

We love Scarborough and bought this apartment in 2016 so that we could enjoy weekends and longer breaks by the sea. We've had a wonderful time completely refurbishing and refurnishing it, and can't wait to share it.

Lee purchased this apartment in 2016

The apartment is perfect for up to 4 (plus travel cot), but there’s a sofabed in the living room, so we can accommodate up to 6. It's great for small groups, and perfect for families with children. Here's a selection of what we provide: THE LIVING ROOM A rather lovely Victorian drawing room filled with light from the large bay window. The heart of your holiday home - a place to gather with your friends or family, to eat, to relax, to play and to plan the next day's adventures. ~ Digital TV/DVD player. ~ A selection of games. ~ Plenty of books to read (for all ages). ~ Free postcards to send home in case you forget to buy some. ~ Sofas with snuggly throws and comfy cushions. One of these is a double sofa-bed. ~ Dining table and chairs. THE KITCHEN Not palatial, but well kitted out with everything you should need. ~ Full size oven and hob. ~ Microwave. ~ Fridge freezer. ~ Hand blender. ~ Tea, coffee and various oils and condiments are provided (including vinegar for your fish and chips!) and washing-up liquid. ~ There's also a washing machine rather well hidden in a cupboard, drying racks and also an outside line in the backyard. THE DOUBLE BEDROOM An elegant double bed is the centrepiece of this room. Painted in restful period colours with beautiful vintage furniture this is a room made for relaxing. You'll love sitting at the vintage desk, writing your postcards, and your next magnum opus; it's a quiet place to use your laptop with the free wi-fi. This room looks towards South Bay and has a (distant) side seaview. THE TWIN BEDROOM This room has a different feel with crisp zingy colours and white furniture. This room looks towards South Bay and also has a side seaview. THE BATHROOM A simple white suite with a shower over the bath. This room also has a useful heated towel rack. We provide hand soap, but remember to pack your own shampoo and bodywash.

This is a truly lovely apartment in a converted Victorian house, with a glorious bay window overlooking a palm tree, and a lovely street that leads to the beach. Turn right for North Bay, left for South Bay - both are about a 5 minute walk!