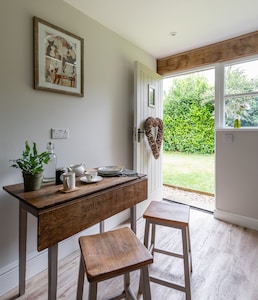 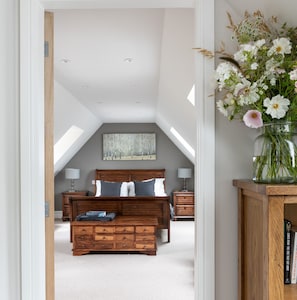 We are a family of five - two adults and three fast growing boys plus a dog called Oskar, three cats and several chickens.

Although it looks old, we built the Croft in 2010 using a traditional oak frame from Border Oak in Hereford. We added the barn a few years later and convered this to guest accomodation in 2019. We are in a lovely location on the edge of Lower Peover village and within walking distance of two great pubs and a well stocked village shop. Knutsford with its boutique shops, cafes, bars and restaurants is less than 10 mins away as is Tatton Park. For guests attending weddings, Oak Barn is just a few minutes from several wedding venues including The Oak Tree of Peover, Merrydale Manor, Colshaw Hall and Owen House. For business travellers, we are only a few minutes from Barclays Technology Campus at Radbroke Hall and Booths Park in Toft, Knutsford, and only 25 mins from Manchester Business Park and organisations gathered around Manchester Airport. Alderley Edge, Wilmslow, Manchester and Chester are all within very easy reach by car or train. Oak Barn is around 10 minutes from both Junctions 18 and 19 on the M6, and close to the M56 too, so ideally located for those looking for a peaceful stopover while enroute to Scotland, The Lakes, North Wales and the South. Manchester City Centre is a 35 min drive, or hop on the train from Plumley (5 mins away) and get the train straight to Piccadilly, or change in Altrincham (and visit the famous Altrincham market) and get the Metro into town. Manchester Airport is 25 mins away.