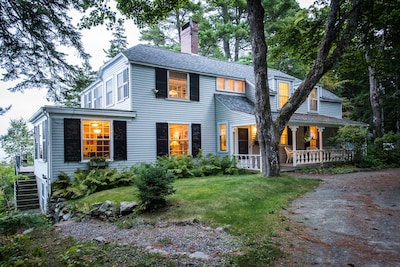 Adam and Jen have a deep love and understanding of the natural beauty surrounding the Acadia/Mount Desert Island area. Jen grew up summers on Long Pond and Adam on a 110-acre farm in Western Maine adjoining the Appalachian Trail. They met here in Bar Harbor working as sea kayak guides in the summer of 1993. Over the years, they have hiked, biked, paddled, and sailed every conceivable route on and around Mount Desert. Adam completed his goal of hiking every trail on the Island in the summer of 1994 and Jen authored The Sea Kayaker's Guide to Mount Desert Island published by Down East Books in 1997. Together they paddled the Maine Island Trail, a 175-mile 28-day kayaking trip from Portland to Machias, up the entire Maine coastline. In the summer of 2000, Jen and Adam started Mountain Sea Properties with a single house, Eagle Cliff, where they were married that same summer. The owner had approached them expressing her frustration renting the home through larger rental operations on the island. She complained that her house was one of hundreds represented so the service she received was minimal. She also stated that those who rented the house were not as well informed as they could be. The tenants were also one of hundreds and the service they received was minimal. Adam and Jen offered to represent the house committing to providing top quality service to both owners and tenants by representing a limited number of houses and providing personalized vacation services. Since then, Mountain Sea Properties has grown along with the Wales family. As year-round members of the Island’s community, Adam and Jen are dedicated to the vitality of the people of Mount Desert Island. Thus, each year they donate a portion of their proceeds to local organizations devoted to sustaining the beauty and well-being of the Mount Desert Island area.

Jennifer Wales purchased this House in 1990