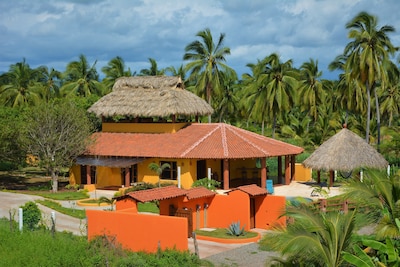 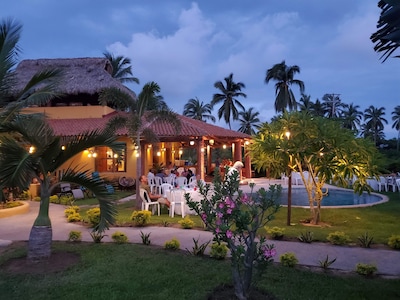 Our beach home is a unique blend of local artistry, location, and friendliness

I am a retired psychiatrist having practiced psychiatry successfully in California for over 30 years. I was also married close to 30 years and am now single once more. We have a son who just turned 32, Matt, who is team manager for the surf company Rip Curl. I purchased this retirement property in 2015 and began building shortly thereafter. My first night here was April 8th 2017. Villa de Los Mangos is a large property and so when the home as you see it is rented I have built a small casita for me out back. The dual space I created has a small charming bedroom and adjoining well equipped office and gym. I also have an outdoor kitchen there where I can prepare meals. I have been looking at my life in 3 stages or acts if you will. The first was "becoming somebody", the second a career and family, and the 3rd act, well, is about me figuring out what it all means and how best to complete this life cycle. This last act of course is and will be the most difficult and challenging of all! Don't you think?

I came here (Playa La Saladita) with my family, well, let's say about 18 years ago. We were a surfing family and stayed in the bungalows out in front of the surf break about a 1/4 mile down the beach from where Villa de Los Mango is located. For many consecutive years I would see the housing community from the lineup up the beach and surfed with a number of local residents having built homes there, including the famous surfer from the 60's Corky Carrol, but I never ventured up the beach to check it out. Then one day many years later while surfing out in front of the Sheraton Hotel in Kauai, Hawaii I had a "vision". I had not been surfing for several years in my adopted home town Santa Cruz. I took a surf lesson with my girlfriend (she did not know how to surf so I took a lesson with her) & the instructor told me, after I had complained this little shore break is pitiful, "well you can go out there and surf then". Half way out in beautiful, very warm (the water in Santa Cruz is very cold) pristine water paddling toward perfectly shaped peeling lefts I saw in my minds eye the exact same scene I had seen so many times so many years earlier - that little community nestled up the beach just down from a very similar warm water pristine surf break. I thought to myself "gee, this is something I like to do (surf) and I am pretty good at it" (the primitive nature of the surf lesson stood out in contrast to my skill level) and I spontaneously experienced a Eureka moment or epiphany "I could live there!" I was aware on a another level that psychiatry was changing so dramatically and so fast and that now I had a plan. The rest is history as they say. I had heard of a sailor in Santa Cruz that had a home in that exact Saladita community. I befriended him and he encouraged and guided me over the following year as I ended my psychiatry practice, sold my home and 90% of all my worldly possessions. As they say in the card game Texas Hold'em "I went all in"! And here I am!

Subsequent to my "vision" discussed above I travelled to Saladita in December of 2014 where my benefactor, Curtis, who had built his home right on the beach, met me at the airport with the legendary Timoteo. Both had built their homes here10 years earlier. I had gone down from California with just the intention of "seeing" whether I could live there and had another plane reservation later to make a bid on a property if things worked out. Well, they both laid out the red carpet for me and introduced me to all the local movers and shakers. I traveled around with two different real estate agents as Curtis and I scoured the properties available. After seeing everything that was available we both fell in love with the property that became Villa de Los Mangos. It was large, absolutely stunning, centrally located and just off the ocean (houses right on the ocean suffer terribly from the moist salt air). It was an ancient Mango grove with 11 of the original mature mangos remaining. My next door neighbor is a Coconut Palm Grove! There was no reason to wait. Shortly thereafter Corky Carroll, the famous 60's surfer, also wearing his real estate cap, "welcomed me to the community". Without question we made the correct choice. I could not be happier with the selection of location nor the exquisite architectural masterpiece that was the result of myself working closely with the master builder and his precocious son architect. Please visit us and come see for yourself the result of love and fortitude.