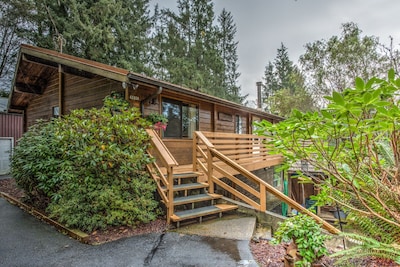 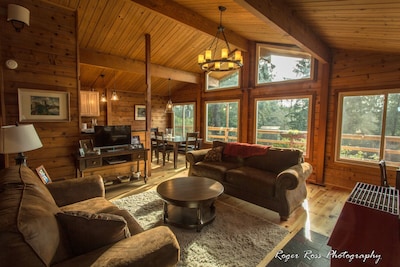 Ask a question
Member Since 2019

My sister and I inherited The Montgomery House from our great aunt and uncle. They built the house themselves from a "log cabin kit." Read about them and the house below.

Libby Manly purchased this House in 2013

About the Montgomery House This house was built in 1982 by my great aunt and uncle, Adelheide “Ad” Meiners and George “Monty” Montgomery. The two met and married during the late 1940s in Portland, OR. Ad was a clerk for Montgomery Ward Department Stores and Monty was an engineer. They spent the next 30 years in Portland and bought a plot of land in tiny Bay City, OR in the late 1970s as the planned their retirement in a place they both felt was the best on earth. Both Ad and Monty were community activists and good neighbors. Ad was president of the Bay City Boosters and an active member of Friends of the Library. She was also instrumental in getting the Oregon Department of Transportation to drop the speed limit dropped to 45 mph on Highway 101 where it passes through Bay City. Monty was active as a master gardener and a lifetime member of the rural advocacy group, The Grange, which is based on “the strong and faithful tie of an agricultural fraternity, yet welcoming of all good moral character.” Ad played washboard for the Banjo Red & His Sidekicks, a music group that played regularly at the Lions Club and the Old Mill Marine in Garibaldi. Monty cultivated his rhododendron collection and worked with the Patterson Creek Pals, which helped to restore salmon fish runs and water quality. Ad and Monty were married for 57 years. Monty died of colon cancer on August 11, 2007 at the age of 89. And after 101 happy years, Ad died of old age on March 12, 2013. Ad was sharp as a tack until the day she died. The night before she died she told me, “Whatever you do, don’t put me in the same hole as Monty! I need my own space!” She credited her good health to two gin & tonics daily, lots of fresh fruits and vegetables, and the clean coastal Oregon air.

Close to everything the Northern Coast of Oregon has to offer but with the privacy of being the last house on the mountain side on a double lot.