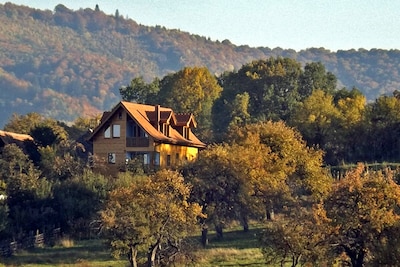 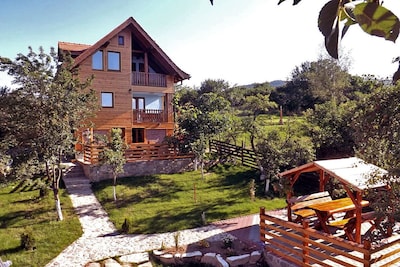 • VILLA ZOLLO • holiday cottage at the Carpathian foothills in Transylvania

Take a break, where unspoiled nature meets traditions and the breath of the past

On arrival, the beds are freshly made, towels and bath towels are provided. Each room has TV, wireless internet, custom made furniture and can be individually heated by means of an infrared panel and/or centrally. Extra bed or cot on request.

… is the land of the legendary places, the churches, castles, fortresses and monasteries. Only a few are known, such as the Dracula Castle in Bran, the Sphinx Megalith in the Bucegi Mountains or Sarmizegetusa, the capital of the ancient Dacian culture. But they are found everywhere: sometimes as a quiet gem on the edge of the road, as a monumental fortress on the safe rock, but also as a hand-adorned token of love to craftsmanship in a monastery in the forest.

A trip can take you an hour or a day. Here are some examples for sights and tours in the area:

The open-air Marmelada swimming pool is just across the hill 20 walking minutes away, and so are five lakes in the valley. In 15 minutes you leave the village below you, passing dozens of hand-carved wooden sculptures in the Poiana Soarelui (sunny glade) on your ascent, to arrive at the mountain meadows and enjoy a unique view across the vastness of the Transylvanian Plain. In good weather, you get sweeping views to the mountain range beyond Sibiu.

The neighbor village of Sibiel hosts Romania’s most important museum for icons with reverse glass painting. From here, you walk along a wild stream to a secluded monastery in the midst of the forest, and further up into the mountains.

Connoisseurs are attracted to the mountain lake at Gura Raiului (13 km). It lies in a depression. The water is clear and in the evening, you can light a fire and watch the fish jump for mosquitoes. Anyone visiting this place won’t easily forget it.

If you are aiming really high, you can choose between two north-south passes across the Carpathians, both to visit in a day trip:

• The Transfagarasan – winding past steep rocks and a waterfall dozens of meters high. On the top of the pass, ‘Balea Lake’ awaits you with a hostel and the house of ice.

• The Transalpina – at 2.145m the highest trafficable road across the Carpathians, sometimes even towers above the clouds. Created by the Romans in their campaign against the Dacians, she was rebuilt during World War II, then forgotten, and today winds through one of the few untouched mountain regions in Europe. The Transalpina starts at Saliste, just 2 km from Vale.

Via both routes you arrive at the southern part of the country, in Walachia, and make your way back through the Olt valley, the only north-south route through the Carpathians, passing ancient monasteries and some steep cliffs. Whoever doesn’t stop here must be in a real hurry.

When you’ve had enough of mountains and steep slopes, turn to the valley. The countryside is spotted with ancient fortified churches built by the Transylvanian Saxons up to 800 years ago.

One of their medieval cities, the European Capital of Culture Sibiu, lies just around the corner and to this day is a fountain of cultural diversity. The medieval fortifications embrace the old town with its historic alleys and restaurants, cafés and bars, some of them set in vaulted cellars or courtyards. During the summer, the town opens up to its visitors and regularly organizes events, ranging from cabaret and theater through open-air concerts to exhibitions of local crafts guilds.

The traditional village museum ASTRA on the outskirts of Sibiu also merits one or two glances: century-old log cabins, water mills, blacksmith shops and saw mills from all over the country were reconstructed true to the original.

From here it’s just a stone’s throw to the fortified church of Cisnadioara, established in the 13th century and one of the oldest Saxon buildings in Transylvania. It stands on an almost circular mountain top above the village.

After walking for hours you will feel your legs. In the saltwater lakes and spas of Ocna Sibiului (25 km away) you can soothe your aching bones in brine, stretch out in saltwater reading the newspaper, and then coat yourself in mud. The way back leads you past Cristian. Here, another fortified church gives you an impression of how centuries ago, people barricaded themselves against Mongols, Turks and Kuruc irregulars.

If you choose to delve deeper into the history of Romania you will hear about the Dacians. Similar to the Celts in Ireland, they are famous for their mystical traditions and particular skills. Even today the faithful flock to their places of worship, only ruins of which have survived.

The last Dacians are said to have taken refuge in the ‘Muntii Apuseni’ (40 km away), a sparsely populated region on the western border of Transylvania. Today however, this area is known for caves and abandoned mine tunnels, some of which run hundreds of meters through rock. Skeletons of dinosaurs and other prehistoric monsters are found in their depths even today. Early birds can explore this area on a day trip.

We are no trained tourism experts. We live in Vale and have joined together in a small and family-type construction company, which all the holiday cottages were built by. After eight years of work - with many possibilities for creative design - we cast the trowels and planning aside for a while and took a deep breath. Today, we care for you as a team. In case of problems or questions you can always get in touch. Furthermore, we might have one or two tips at hand for you, but we also master the art of discreet retreat. From the income generated by the houses (your money), on the one hand the 'investor' is served. On the other hand, administration and care-taking yield a secure income for several families. When we cook for you, or when you order local products or go shopping in the local grocery, also a number of other villagers have a benefit. Finally, we are planning a soup kitchen for the less well-off families in the village which will also be financed from the proceeds of our holiday homes. We nurture a climate of openness and equality-based relationships. And we look forward to our mostly respectful and tolerant guests who contribute personally to bring together the different universes in this world. .

W. Konnert purchased this house in 2009

... because cackling chickens and neighing horses strain the mind less than howling engines. ... because the sight of wooded mountains and free-flowing wild brooks is more pleasing to the eye than concreted soil on which skyscrapers grow. ... because there are not many places where the breath of bygone times is still visible and perceptible, and where, nevertheless, you don't have to give up the amenities of running water, central heating, TV and internet. ... because you can lie down on the hillside with a blade of grass in your mouth, and half an hour later you are standing in front of the imposing fortifications of a city that truly deserves the name 'European Capital of Culture'. ... because you enjoy a privilege here as a Western alien. It expresses itself in a particular respect rather than in attempts to defraud or attack you. .

... you may judge for yourself after you've been here. .