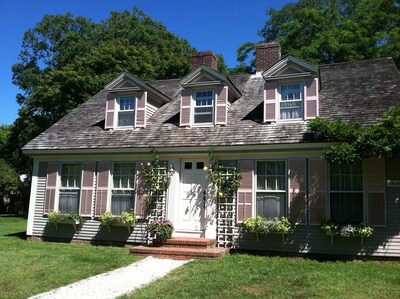 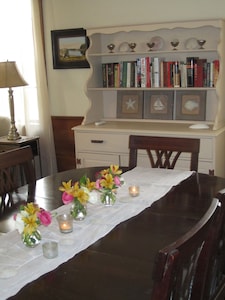 We live in the adjacent main house built in 1680. I retired in 2011 from 36 years in education, most recently as the Director of Special Education at the local regional high school. I have been doing sculpting for 20 years and have received several awards for my work. My work has been shown at multiple Cape venues, including The Cultural Center of Cape Cod, The Cape Cod Museum of Art, and Cotuit Center for the Arts. I was previously named "Artist of the Month" at the Chatham Orpheum Theatre. I lived in Italy, south of Florence, for a year, and have been back many times since. We love exploring France, Italy and Spain together. Carolyn and I enjoy sharing Cape Cod with others, particularly those who appreciate art, good food, good wine, and living life to its fullest.

Gary Urgonski purchased this House in 1986

The carriage house is a Greek Revival style building which was previously attached to the main house. In the 1930's, the previous owners gave their land to the town for a new school, and when both buildings were moved a few blocks down the street, the main house and carriage house were separated, and are currently situated close together. Our property is centrally located right in the heart of Cape Cod.

Cape Cod is a very special place, known around the world. Surrounded by water on three sides, it has its own micro climate. Being cooler in the summer and warmer in the winter affords it beautiful weather. "The Cape" has beaches on the ocean side, Nantucket Sound side and Cape Cod Bay side, cranberry bogs, paths through the woods, sand dunes and charming towns and villages. Cape Cod provides great restaurants with local seafood, biking, fishing, shopping, night life, and fun things for the kids as well. South Dennis is only a little over an hour away from airports in Boston or Providence, Rhode Island.

Languages:
English, I speak a little Italian and a little Spanish.