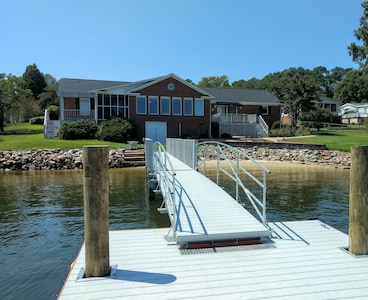 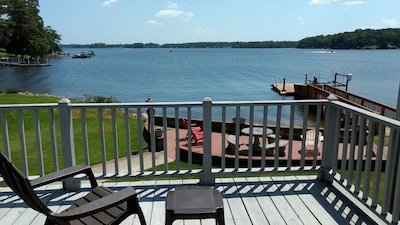 Sleeper couch in the living room.

Andy and Kathy Keenan are the property managers for Memory Lane. They own another Lake Murray vacation rental home, Snug Harbor, that has a great reputation and a loyal following and when the owners of Memory Lane needed help renting their lake house, some friends told them about us. When we saw Memory Lane, we couldn't say no. It's just beautiful! We know you'll love it!

Kathy Keenan purchased this House in 1955

This beautiful home on Memory Lane was built by Myrtle Weinreich's parents in 1955. We asked Myrtle for some childhood memories of those early days - We helped clear the lot. We had to pick up our share of rocks before we could play in the water or ski. Camping out on army cots. Then excavation of the boat house and the foundation for the original cement block house built by Mr Palmer from the Hollywood section of the Saluda county. Family gatherings and skiing. Watermelon and skiing. Skiing in the rain and skiing in the dark. Oops that 's a no no. Daddy in the boat pulling people on ski. We would be in the water helping people learn to ski. Friends, family, people who shopped at the Piggly Wiggly (my father's store), classmates, children, and grandchildren, basically, any body that showed up on Sunday afternoon was given a chance. Slalom, building pyramids, ski jump, shoes skis, saucers, knee boards. We tried it all!! 'Walking home from a boat ride', we never had a paddle but always skis. The best ski cove on Lake Murray is around the point and to your left behind the two islands.

The lake house was remodeled in the early 2000's and became the lake home of Myrtle's parents. It looks and feels brand new. 'Look at the view!' is a common saying. Facing the east we are honored with the glorious sunrises and a serene, silvery path of the moon on the water as it passes in the night. Now we invite you to share their lake home and create your own Lake Murray memories. Enjoy!