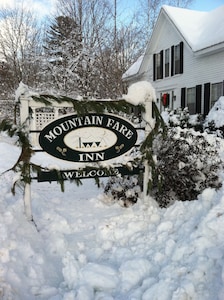 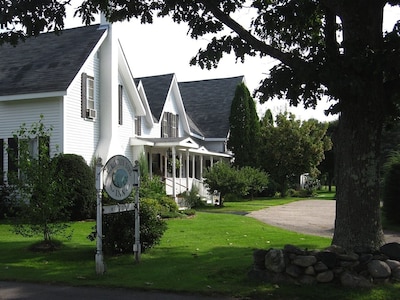 Susan and Nick Preston have owned, enjoyed and stewarded the Mountain Fare property in Campton since 1982. They came to the area in 1980 as freestyle ski coaches for the Waterville Valley Ski Club and proceeded to raise two boys and run two businesses – Mountain Fare and Freestyle America, a summer freestyle training program that operates out of Waterville Valley, Whistler, BC, and Lake Placid to this day.

Nick and Susan have owned and stewarded Mountain Fare since 1982! They actually 'landed' here by coincidence. As young ski coaches at Waterville Valley Resort they rented rooms here (then called Anderson's Inn) in 1980 and '81. It was a run down, abused, beautiful old building that no one took care of but just had its own will to survive. In 1981 it was for sale. They realized that it had been a favorite full service Inn for skiers on the road in and out of Waterville Valley in the 1970's. It actually served as a guest house dating back to the turn of the century when the trains from Boston stopped in Campton. It was built around 1830 as a Pemi Valley farm in logging, trapping and trading country. It was actually the beautiful land and location that lured the Prestons into buying the property. The historic building was daunting with 37 broken windows and only one out of 8 baths working. The Preston's needed a place to live and another income since skiing was seasonal. They proceeded to slowly renovate the Inn and created our summer Freestyle Ski Training programs called Freestyle America.

What makes this Bed & breakfast unique

Mountain Fare is an historic New England building that sits on six acres bordering the White Mountain National Forest. It is one of the oldest classic ski lodges in New Hampshire. The 11 rooms, each with private baths, comfortable and fun common areas, dining room that seats 24+ people, country kitchen that supports a gang of people with two stoves, two fridges, extensive, groomed fields and 6 acres of grounds, porch and decks. This property loves hosting families, groups and friends. We make it easy for you to escape for a while and get back to basics. Our area is special in that it is far from commercial distractions. Hike, bike, play golf, kayak, canoe, swim, play tennis, ski, snowshoe, trail run, explore the White Mountains or get some reading done.