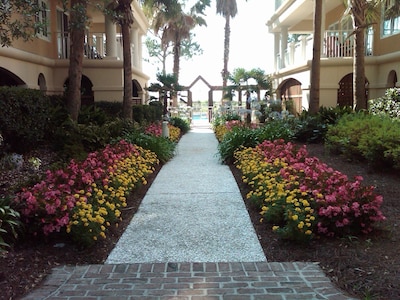 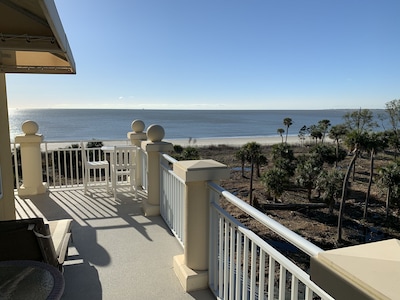 Terry and Chris King live in the Washington DC area and have been married for 49 years. They have 3 children and 4 grandchildren. Both have recently retired and love spending time on Daufuskie.

Terry & Chris purchased this Apartment in 2005

Daufuskie Island is a respite from the hectic lifestyle of DC. The whole King family, including our large extended family (13 siblings and families), has fallen in love with the island. After vacationing on Hilton Head for many years, we decided to explore Daufuskie and were attracted to this non-commercial, no traffic, open spaces and eco friendly heaven.

The view from the condo at Sandy Lane is breathtaking. We had stayed at oceanfront resorts previously but in addition to the ocean, we usually saw lots of towels, vendors, and crowds of people. The focus here is the beautiful ocean. We also fell in love with the island hospitality. It's different here than on Hilton Head. People remember you and you know the same staff year after year - the restaurant workers, the ferry drivers, the resort staff. Plus, Daufuskie is the setting for the classic book 'The Water is Wide' by Pat Conroy, which was always one of my favorites. The Gullah history of the island is very interesting and you feel so close to it here. You won't find a crowded boardwalk, or lots of noise, or traffic. You feel very close to nature with the ocean and the trees. Most of the Island is wooded. Seeing the stars on a clear night is truly spectacular. Where can you see not only the popular constellations, but also the Milky Way? Make sure to install the stargazing app on your phone or tablet. Our grandchildren never consider turning on the TV when they are in Daufuskie. Between the beach, the pool, horseback riding, and going for ice cream, they keep everyone hopping. Our teenagers and young adults love jogging on the beach, going on golf cart expeditions, and spending time at nights at the local restaurants to listen to the bands. When you spend a week on Daufuskie, you feel like you've had a vacation from the hustle and bustle of the fast world. The typical first time vacationer to Daufuskie usually leaves wondering why they didn't know about it earlier and look forward to returning.