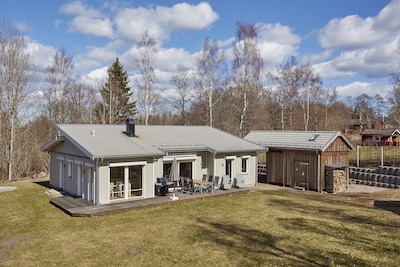 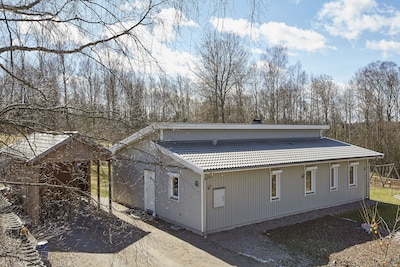 Luxurious home for winter with sauna for 6 persons, near Lake Vättern Hjo

Well-equipped, quiet and comfortable abel living near the forest

Hjo is located on the Vättern, the second largest lake in Sweden, about 1 hour drive from Jönköping. The Port of Hjo is 10 - 15 minutes drive from the house.

Hjo is a medieval city, which is the first time in 1413 mentioned in written sources.

The Old Town has preserved its medieval plan and large. North of the old town to the harbor and the city park, which was originally a belonging to s water Arboretum. The wooden villas of the sanatorium have been preserved and are now home to, inter alia, a youth hostel and Vättern the aquarium and a city museum. Hjo received the 1990 Europa Nostra award for the remarkable preservation of its timber town.

Several golf courses are located in the surrounding area. The nearest golf course is approximately 15 minutes.

Walking and jogging are possible along signposted routes between 1.5 to 16 Km.

For winter lovers there are in the vicinity several cross-country trails.