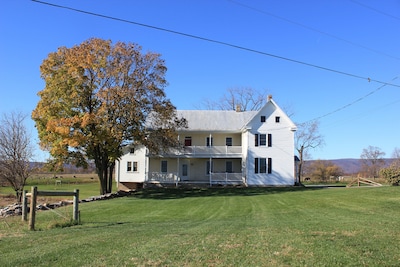 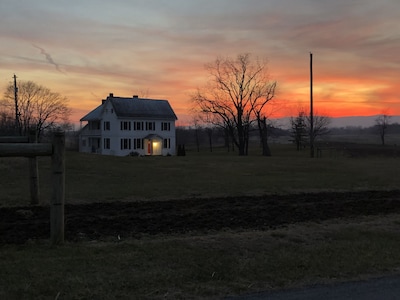 Bedrooms are on 2nd Floor with central a/c and heat. The master bedroom has a private bathroom and access to a porch.

Approximately twenty five years prior to the French and Indian War, The McDowell Family settled in the beautiful Cumberland Valley and farmed land at the foot of Parnell’s Knob for several hundred years.This 19th century farm house is located on land that has been in the McDowell family since the 1700′s. The farm is still in the McDowell name with the eighth and ninth generations of the family involved with ownership. It is still a working farm with cattle housed in the barn and crop lands and pasture being utilized. Our family loves to visit this amazing house on its beautiful property, and we would love to share our great experiences with you.

Joe McDowell purchased this Farmhouse in 1830

In 2012 we began renovations to Parnell Springs to provide a unique guest house rental on the historic property with modern amenities. Originally there were five bedrooms on the second floor of the house. We converted this area into four bedrooms, including a hallway and two bathrooms. Downstairs, the guest front door was removed and an additional window was installed in it’s place. The down stairs will feature a modern kitchen, living room/dining area, parlor, and study. Future plans call for the old kitchen to be converted into a sunroom. There is a second story porch as well as three porches on the first floor from which to enjoy views of Mount Parnell and the beautiful countryside in our unique Cumberland Valley.

What makes this Farmhouse unique

The brick section seen in the middle of the house is as the original house was built in 1870 right after the Civil War. The house had two front doors, which was the tradition of the time; the one on the left was for the family and the one on the right was specifically for guests entering the living room. The right door has been replaced with a window. A spring located in the basement provided the water supply and necessary cooling for the milk harvested on the farm. Near the beginning of the 20th century the family expanded their living space on the north and south sides of the house. The new section on the north included two rooms downstairs, one of which was a formal parlor. A twisting stairwell leads up to two more bedrooms on the second floor. The one story addition on the south side of the house contained a kitchen and bathroom, and a concrete cistern was installed above the bathroom to provide running water.