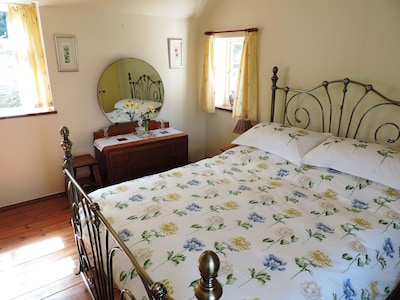 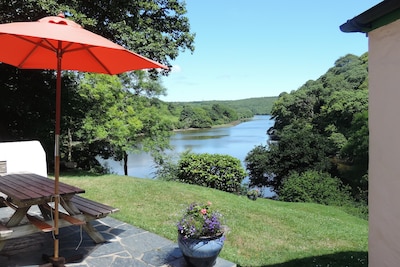 Leading from the upstairs landing is the seaside themed children's bedroom and the adjacent master bedroom. Solid oak furnishings, polished pitch pine wooden floors throughout with soft bedside rugs. Spectacular estuary views from both rooms. If required, there is a travel cot (suitable for up to 2 years of age), high chair, sturdy baby bath and an anti-roll changing mat. The spacious, warm and inviting Garden Room is just across the patio and overlooks the garden with views out to the water through large windows. It offers flexible sleeping arrangements for two adults or older children. Completely refurbished and newly carpeted with very comfortable single zip and link beds as well as a wall mounted 40" HD television, this popular bedroom has duck egg blue soft furnishings and white Shaker style furniture, over-bed reading lamps, radio and a hair drier.

Hello from Linda Dandy. For me, it is a real privilege to assist with the managing of Rock Cottage which has been in the Dandy Family for 65 years. On a holiday to the area in 1954, Rock Cottage was ‘discovered’ by Robin's parents, Eleanor (Peggy) and Leslie Dandy. They immediately recognised the special nature of this 16th century cottage and its unique location, which stands alone within an acre of land bordering the Helford River on two sides. Later that year the property was purchased at auction for their retirement.

Linda Dandy purchased this Cottage in 1954

At the time of purchase, the cottage was condemned as unfit for human habitation and was also Grade II listed because it was then the ‘only recorded example of a traditional Cornish cottage built on a projecting rock foundation’. There was no mains water or electricity, so rainwater was collected for washing and oil lamps and candles provided the only illumination. Drinking water was collected from a nearby spring. A comprehensive renovation programme took place and this was completed by January 1956. The main building was demolished to ground floor ceiling level except for the chimney end which was preserved. The traditional cob (mud, straw and stone) walls retained where it was possible. A Bathroom was created from the old Scullery, the Sitting Room extended and a new Kitchen constructed. The Garden Room was formerly a separate cottage and had been altered in the early 1900s to become a Meeting Room for game shooting for the Trelowarren Estate. Both families living in the cottages’ had shared the semi-detached privy with their own pathway to it. This building has been preserved and still exists at the bottom of the garden. It must have been quite tricky to keep a candle lit in order to see where you were going! An 1876 map also shows a boathouse and the original two stone walls of this still remain. The objective of the renovations was to modernise the cottage but still retain its character and originality as much as possible. We believe this has been achieved and many guests think so too. It is a superb waterside retreat and there is nowhere quite like it!

Rock Cottage is in an Area of Outstanding Natural Beauty with very convenient and easy access to many of the local amenities. However, it retains a tranquil and idyllic outlook. The Dandy Family are pleased to share the wonders of the Mawgan Creek and the peaceful atmosphere of Rock Cottage with you where a sincere and friendly welcome beckons.