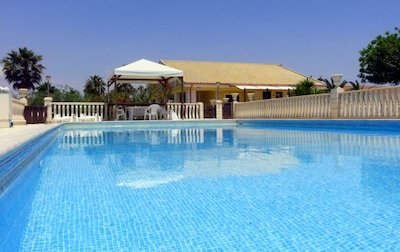 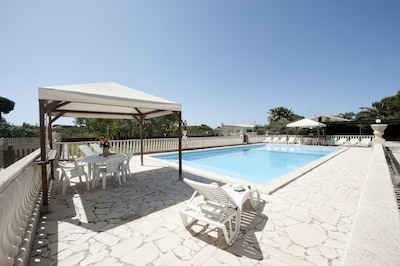 Villa with garden and swimming pool very close to the beach

The important seaside resort of Marina di Ragusa is located just 5 km away from Punta Secca, it is provided with services and facilities for every need: banks, post offices, restaurants, discos, sport facilities and much more.

Along the coast at about 6 km, there is the nature reserve of the River Irminio, an unpolluted Mediterranean estuary oasis. The area around the river mouth with its wonderful sandy beaches is a hiding place for many species of birds. At about 3 km from Punta Secca towards the West, there is the big beach of Randello, a 2000 meters long sandy shore, where in the warm summer nights, sea turtles come to leave their eggs behind the woods, which can be considered a green lung for this part of the province and it is equipped with a picnic area.

The Province of Ragusa has recently been included by Unesco in the World Heritage List for its precious Baroque style buildings. It is literally a casket full of architectural, archeological and naturalistic treasures.

There are numerous tourist attractions: the Baroque style towns of Ragusa, Modica and Scicli, the ruins of the Great Greece city of Kamarina, its famous museum, and the hinterland of the Hyblean Mountains, characterized by deep “gorges” and its typical wild Mediterranean undergrowth, populated with rare species. Last but not least, the extraordinary “Cava d’Ispica” Park, a deep canyon with evidence of a prehistoric past life and many nature beauties.

And in Ragusa the breathtaking Baroque quarter of Ibla, built on a hill, is like a jewel embellished with the splendid gems of Baroque architecture: the cathedral of San Giorgio, the many spectacular churches and all the stately homes.

Modica is built on the two sides of a valley with its imposing cathedral of San Giorgio and it is famous for its culinary traditions.

Finally, the Northern part of the Province, located on a limestone plateau is an interesting destination for visits to mountain villages, with its pleasant mountain bike paths, trekking routes and country lanes for horse riding.

Just outside the province of Ragusa you can visit: the capital of Baroque style architecture Noto, Syracuse and the famous Taormina, Agrigento, Piazza Armerina, Selinunte and Segesta. They can all be reached in just two hours by car or by public transport.

The most mysterious and fascinating tourist attraction of South Eastern Sicily is Mount Etna, the highest volcano in Europe, whose beauty is really worthwhile seeing for the unforgettable emotions it can give you in every season of the year.

The Province of Ragusa stretches out from the plateau to the sea showing beautiful carob and almond trees, picturesque dry stonewalls and the austerity of the typical farmhouses, “le masserie”.

The local cuisine is a most exquisite welcome to the visitors, who can taste: ravioli, filled with ricotta, soft white unsalted Italian cheese, cavati, homemade pasta with tomato and meat sauce, the local aspic made with pork meat, homemade conserves, fruit, vegetables, and above all the ”Ragusano”, the most typical local cheese, and the fine wines from the Acate Valley. These are all D.O.C. products.

Furthermore, many religious festivals, which are still very important to the population, represent an important opportunity to get to know old unchanged traditions such as those concerning the Holy Week and other folk festivals of the twelve towns of the province.

There are many cultural and prestigious events such as classical theatre performances taking place every two years in the Greek Theater of Syracuse, the International Music Show “Ibla Grand Prize”, the Wine & Food Event “Cheese Art” and many fairs and festivals.