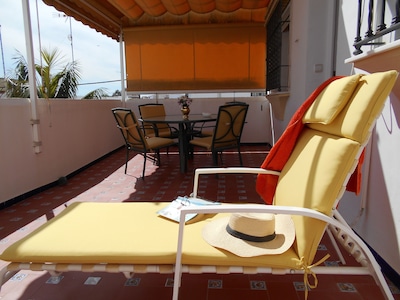 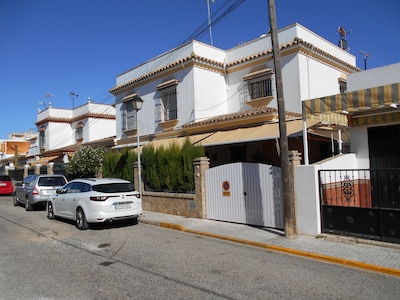 •Chipiona is located to 54 km. Of Cadiz, the capital of the province. From her, it is acceded to Chipiona by the N-IV or A-4 (Madrid-Cadiz), until El Puerto de Santa Maria and we will take the A-491 there that will take to Chipiona. If we come from the north, from Sevilla (to 105 km.there) we will take the AP-4 until Jerez de la Frontera and the A-840. Also we can leave the AP-4 in kilometer 44, in the population of Las Cabezas de San Juan and to continue until Chipiona by the A-471 and later the A-480.-

The quiet town of Chipiona, is located northwest of the coast of Cadiz, on the Costa de La Luz, just 52 km. Cadiz, the capital of the province is the oldest city in the West (3,000 years).

The origins of Chipiona goes back to Roman times. The most emblematic monument in Chipiona perhaps its lighthouse, which dates from 1867 and is built at Punta del Perro, in the same place where Quinto Servilio Cepión, the tower was built in 140 BC.

We can also see the Shrine of Nuestra Señora de Regla, with its Moorish cloister of the XV century and the image of the Virgin (XII or XIII century). The Parish of Nuestra Señora de La O (XVI century), the Castle was probably built on another of Arab origin around the year 1295 and the Fisheries Corrales (believed to be Roman).

From Chipiona, you can visit the wineries, the School of Equestrian and the Racing Circuit (in Jerez), the horse racing on the beach (in Sanlúcar de Barrameda), or to the Route of the White Towns in the Sierra de Cadiz, north of the province. The route enters the Grazalema Natural Park, declared a Biosphere Reserve, a must for those who enjoy active tourism and rural tourism.

And not far away, across the river, another natural park, the Doñana Natural Park.

In the area of Chipiona you can see and practice a lot of activities, but especially we can enjoy its 12 Km. of magnificent beaches of fine golden sandy, some of them, awarded with the Blue Flag of the Clean Seas of Europe.

Hello, my name is Antonio and I'm married to Mari. I am currently retired, but during my entire working life I have worked in a bank. I have been assigned to numerous branches in different places, but now I have my residence in Chipiona. Chipiona is a very quiet town on the coast of Cadiz, has 19,000 inhabitants, but in the summer months can multiply by ten its population as it is one of the main tourist destinations of the Costa de la Luz. It has 3,000 hours of sunshine per year, the winters are short and mild and the summers, although hot, are much less than in the interior of Andalusia. It has magnificent beaches of golden and fine sand, awarded with the Blue Flag of the Clean Seas of Europe and with wonderful sea promenades, where we can stroll, sunbathe or enjoy the sea breeze. I hope you like Chipiona as much as I do, enjoy your holidays, and want to repeat again.

Antonio purchased this apartment in 2000