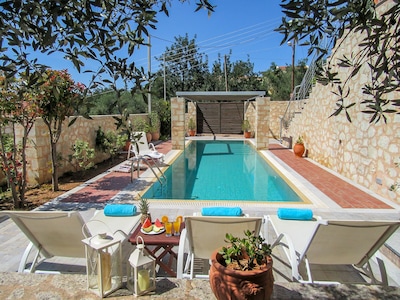 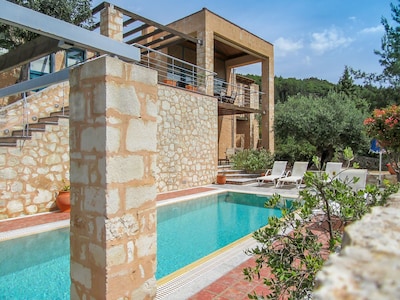 queen · Child bed
A baby crib can be added

single (2) · Child bed
A baby crib can be added

The master bedroom has ensuite bathroom equipped with bathtub with hydromassage. A cot 2.00mx1.50m can be added in one of the twin bedrooms to accommodate an extra person. All bedrooms are equipped with TV, satellite receiver and DVD player. Satellite TV can be used only with free channels.

Gavalochori is a traditional Cretan village situated in the Apokoron region about 3km inland from the coastal village of Almirida. Gavalochori is an old historical village with approximately 500 residents. It is a typical Cretan village with a small square where a coffee shop, a bakery, a mini mart, two tavernas and other convenient stores can be found. Several narrow streets branch off its center and one could wander through several interesting sections of this officially protected village. Stone built houses with lovely backyards full of colorful flowers can be found . A lot of interesting buildings can be seen, such as the 18th century two-roomed, arched olive oil press, the temples of Panagia and Agios Sergios, the old school, and the historical folk art museum. Within a short distance (5km) from tranquil Gavalochori one can drive to Almirida, a picturesque coastal village. You may dine there in one of several seaside tavernas or relax sipping your drink by a bar during sunset.

Ask a question
Member Since 2005
Christos Skalkos is a Premier Host·The owner or manager of this property consistently provides great experiences for their guests.