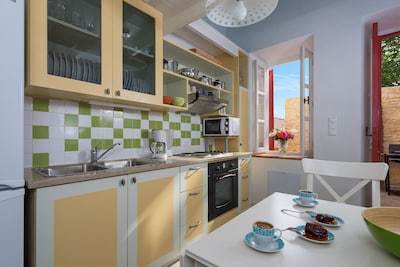 A square like an open theatre, an old palm tree, quiet, beauty, art

Ask a question
Member Since 2008

Biologist, Quality consultant, 1966 year of berth, married with Evaggelia (Biologist). We have a daughter Nena 1995 (Biologist) and a son George 1999 (hope not Biologist).

In the shadow of the old plane tree, in the amphitheatrical square “Avgerinos”, were laid the ruins of the stone building, a pile of garbage and stones, which represented the "shame" of this graphic and amphitheatrical square. A folksy house, whose time travel began in the early or in the mid of 19th century, sensed the breath, the crying and the delight of the locals, the travelers and the warriors of life, and followed the fate of abandonment, that wars and poverty imposed. And now comes the right decision to revive and accept travelers, who come to live days of tranquility and authenticity, and savor the quality of Greece. In this authentic habitat, they will see, will live and find out, that “Tourism” does not mean subordination, does not mean whatever apartment, that holiday in Greek islands is neither just “ROOMS TO LET”, nor the impersonal few or five stars room. This “Tourism”, constitutes the reflection of this island’s history. And that is the story that this house is going to recount, the new decade of the 21st century.

Villa Platanos, is a clear proof of virtuosity, of craftsmanship and elegance of Symians’ craftsmen, who continue to work and produce such carvings. For the restoration of the house, where used the existing stones of ruins, while, the old masonry was maintained where possible. The traditional materials such as stone, wood, tiles and erratic Symian slates, dominate. However, for reasons mainly static, for fire protection, thermal insulation and hygiene, modern materials were used, such as unreinforced and reinforced concrete, insulation materials, ceramic tiles etc. This modern materials, where used so as not to weaken the sense that this building, existed even since the pre-past century. The layout of the building follows, to a very great extent, the old organization of spaces. Although, it modifies, in the least burdensome way, the sizes and the uses of spaces, in order to correspond, as much as possible, to the requirements of the 21st century. The underground tank cleaned of litter and repaired, so as to keep storing the rainwater. Although this water is not sufficient for the current needs of a home, supplements with water the City network, which now reaches, on a daily basis, the houses of the village. The basement, which was once a storage area beneath the plaster of the ground floor, after the dredging, got a sufficient height to form the bath of the ground level. On the ground floor, the traditional "Tsimia" was maintained, viz the fireplace with the niches and the cupboards on either side, which indicate its use as a kitchen. This room, because of its size, constitutes a place where the family could spend most of the time. It can also be used as a sleeping area for large families, as the wooden sofas, generously offer another storage room.