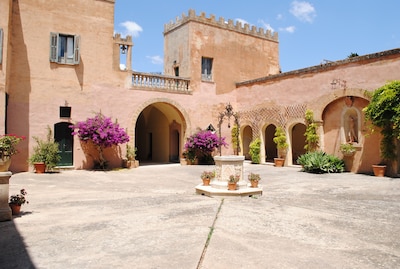 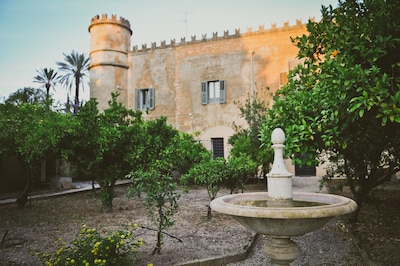 Ask a question
Member Since 2002

Marcello and Caroline are the proud owners of the ground floor of Santa Maria, a seventeenth century castle in western Sicily. Having met in London at a Halloween party, we have been together for over 40 years. Thanks to Marcello's career in an international pharmaceutical company, we have lived in various countries in South America and the Far East whilst bringing up our two daughters. While Santa Maria has been in Marcello’s family for over a century, it was at first the base of the family wine business. Then it became his parents’ home, which we and our two daughters would visit every year while we were based abroad. Twenty years ago Marcello inherited a part of the estate and we decided to convert the ground floor as our own holiday home. Respecting the villa’s three hundred years of history, we carried out a complete restoration, even discovering a seventeenth century archway in the process. Caroline’s interest in decorating is reflected in the attention to colour evident throughout. The property is now furnished with items inherited from our family and gathered from our travels around the world. Having completed the interior, we turned our attention to the grounds. We revived the walled orange garden, restored the old tennis court, planted an olive grove and added a beautiful swimming pool set within a Mediterranean garden. Meanwhile Caroline was writing her book about the villa, Casa Nostra, A Home in Sicily, based on her experience of family life in Sicily and the local culture and traditions. The book was published by Harper Collins in 2007. Santa Maria is so beautiful and so special to us that we now come here several times a year, sometimes with our children and grandchildren, but also for the olive harvest. Both our daughters chose to celebrate their weddings here. Since we now spend much of our time in London, we are happy to share our holiday home with other guests.

Santa Maria has a special place in our lives. Having lived in different countries about the world, we have always been back to the villa in Sicily, regarding it as a cornerstone in our lives. Marcello has an extended family based locally and many friends dating back to his childhood. Caroline has got to know the town and its history very well for the purpose of research for her book and is fascinated by many aspects of Sicilian culture. It is an amazing experience to live or stay in a villa so steeped in history. Although records go back as far as the 18th century, the building itself is at least 100 years older. The watchtower in the grounds bears an inscription with the name of the architect and the date:1584. Most probably the building once belonged to the Church and may have been a commanderie for the Knights of Malta. Anyone with an interest in history and Mediterranean culture cannot resist the fascination of this Sicilan castle surrounded by lush gardens, olive groves and vineyards, now with its own swimming pool and renovated tennis court.

What makes this Villa unique

We love santa Maria for it's romantic castle-like aspect and the beauty of the grounds. It has been a privilege to enhance the interior of the 17th century building and create a Mediterranean garden to complement the existing orange grove, olive trees and cypresses planted by previous generations.