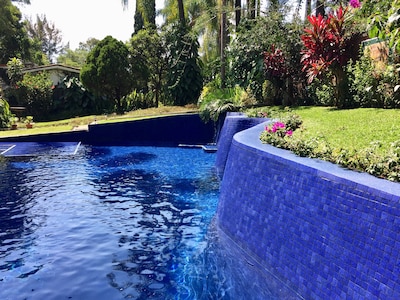 Cuernavaca is located in the historic highlands of Mexico, where history and culture abound.

The surrounding areas were founded more than 4,000 years ago with numerous archeological sites, including the UNESCO World Heritage Site of Xochicalco. Cuernavaca was conquered by Hernán Cortés and the Mexican Conquest is depicted in the fabulous Diego Rivera murals in the 16th Century Cortés Palace also known as the Cuahuanahuac Museum. Museums are numerous and varied in the Historic Center or Centro Historico of Cuernavaca. 16th and 17th Century Augustinian and Franciscan Monasteries and Convents were founded in the State of Morelos and the Route of the Monasteries won the 2014 World Tourism award in Madrid. Colonial Era Haciendas with their history of fomenting the Mexican Revolution dot the countryside and urban areas with many converted to luxury hotels which are also popular destination wedding venues.

Cuernavaca and the towns surrounding this state capital have a culinary history going back hundreds of years. Here you will find restaurants that offer exquisite Mexican regional dishes as well as international fare. From luxurious Relais & Chateaux restaurants to the corner home style eatery, Mexican food is authentic and always homemade using fresh, local sources. The municipal markets or mercados of family-owned stands offer in-season fruits, veggies, cheeses, flowers, coffee, maize products (made at home), meats, poultry and fish. Culinary institutes offer classes and are affiliated with their European partners, but there are chefs who offer private classes.

The State of Morelos has two Pueblos Mágicos, Tepoztlán and Tlayacapan which are villages that are traditional in Mexican culture and awarded this title by the government to preserve the cultural traditions, folk art, architecture and food. On Sundays, the traditional market days, the food available is nothing short of ephemeral. From Pre-Colombian fare (usually vegetarian) to typical Mexican offerings such as moles, quesadillas, chile rellenos, pipian, guacamole, tamales, tacos, sopes etc. the food mercados are not to be missed by foodies ready for street food. Five star restaurants are also notable in Cuernavaca and many are housed in haciendas and majestic estates such as Las Mañanitas, El Madrigal, Casa Hidalgo, Hacienda de Cortés, Casa Rivera and Casa Manzano which are close to the Villas.

Cuernavaca´s nickname, The City of Eternal Spring, hints at year-round sports to be enjoyed from golf to extreme sports such as Water skiing, Zip-lining, Spelunking, Parachuting, fly boarding, bungee jumping, hot air balloon rides, jet skiing, skydiving, and flying in ultra-lights. Within 30 minutes from Cuernavaca is Lake Tequesquitengo that has not only a party-boat but also many beach clubs that offer day passes. The famous volcanoes of central Mexico, Popocatepetl and Ixtachihuatl feed springs and underground rivers that span the Morelos valley. Spas are big in Morelos and they range from natural springs like Las Estacas to European style spas in exclusive settings of luxurious hotels or traditional saunas featuring temazcals that use native herbs for healing and cleansing. Private masseuses are available by appointment at Villas Bellavista, as too other wellness services like traditional Mexican herbology therapy, magnetic therapy, acupuncture and US licensed hypnosis. Morelos´s Ethnobotany Museum and Botanical Gardens housed in the original estate of Emperor Maxmillian´s mistress, La India Bonita, is a good starting point for exploring the ancient medicinal practices of the curanderos (healers).

The Historic Center of Cuernavaca is eight minutes from the villas and the main historic avenue for Cuernavaca, Ave. Emiliano Zapata is 1.5 blocks away. All services are within walking distance including supermarkets, bakeries, banks, fast food/convenience stores, great restaurants, galleries and shops. The villas are ideally located in the preferred northern part of the city, in the foothills with a beautiful view of the valley below-Villas Bellavista.

I am a Cuernavaca native, but my father was from Upstate New York and started building these homes with love to detail in the 40's. My mother was from Monterrey, Mex. I have lived my whole life in our Casa Grande which is part of our complex of 8 colonial-style houses on 1.5 acres. I studied in Switzerland and attended Shattuck-St. Mary's in Minnesota. I speak fluent Spanish, English and French. I have traveled around the world and have family in India, Australia and the US. I am married (32 years) and have 2 daughters. We are now going into our 3rd generation in our family business in providing personal attention to our guests to make their stay an unforgetable authentic Mexican experience in their home away from home.

Roberto purchased this house in 1945

This property has been in my family for over 70 years and now is going into the 3rd generation. My father constructed these homes with only the best construction materials of handpainted Talavera tiles, & murals, wrought iron, chiseled stone, and solid cedar doors with attention to detail such as niches, arches and customized cedar French doors opening to terraces and beautiful, tropical gardens. He wanted to provide a Mexican oasis not only for his family but for his friends who needed to escape the harsh winters of the Northeast.

When guests rent with us they have the assurance that they will be renting from a legally registered, government regulated business that provides bonafide legal receipts/contracts which is required of all short term/vacation rentals. Our guests will enjoy the personal attention of our professional staff and enjoy amenities that are usually found only in upscale hotels. The remodeled 40ft. tile pool with it´s ¨playita¨ is enjoyed year-round and the smoker/bbq is perfect for enjoying outdoor meals 365 days of the year!