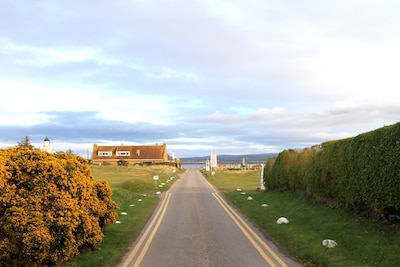 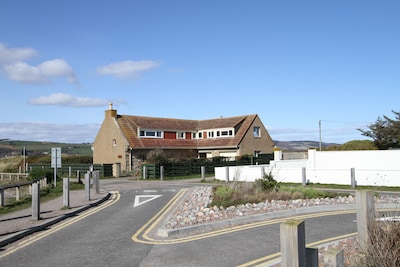 All bedrooms have beds, bedside tables, wardrobes, plenty of drawer space, ample lighting, hair dryers, and central heating radiators. All mattresses are sprung and covered with mattress protectors. Pillows are duck feather and covered with pillow protectors. Duvets are also duck feather. Please note that foam pillows and duvets are available for guests who may be allergic to feathers. Please make any allergies known at the time of confirming your booking. All beds have scatter cushions and throws.

Chanonry Cottage was home to David and Mary Galloway and their family for 48 years between 1970 and 2018 when it was purchased by the Lawson family to be their Scottish Highland retreat as well as their eventual retirement home. The Lawson family lead busy lives dotted around the globe and we are very pleased to be able to share our home with others so that they too may enjoy the pleasures which it brings to us.

Marc Lawson purchased this Cottage in 2018

The Lawson family discovered the sheer beauty of the Scottish Highlands whilst on holiday there in December 2017. So impressed were we with the area that we returned to visit it in April 2018 when we quite by chance stumbled across both Chanonry Point as well as Chanonry Cottage. The cottage had literally just come on the market for the first time in over 48 years and, upon viewing it, we immediately knew that we wanted to make this our family 'home from home' and that we would also eventually want to spend the twilight years of our lives in this extraordinary place. Thank you David and Mary for agreeing to sell your cottage to us and for allowing not only us but our guests who book it to experience the cottage and all the wonderful things that go with it!

Our Scottish Highland adventure began one Sunday morning in April 2018 when we drove to Fortrose to look for Dolphins. We had done some research on the internet and discovered that a place called ‘Chanonry Point’ was generally regarded as being the best place in the United Kingdom to see Dolphins from land. Our daughter, who has ambitions to become a marine biologist when she finishes school, therefore nagged us into taking the road trip from Nairn on the other side of the Moray Firth. As luck would have it, we saw no fewer than seven dolphins that morning (we were also fortunate enough to see seals) which we were able to watch and enjoy for several hours. Upon setting off from the Point car park, we happened to notice a very quaint old cottage which had a ‘for sale’ sign outside. We immediately called the number advertised on the board and the rest is history. Chanonry Point is an extraordinary place. It’s location on the tip of a spit of land which extends into the Moray Firth allows for uninterrupted 360 degree views of all of the surrounding areas. The light house, which is little more than a stone’s throw away from the cottage, was built in the 1840’s to guide ships sailing up and down the Firth (the cottage was originally built to house the lighthouse keeper). Fort George, which is a little further away across the water, was built immediately following the 1746 defeat at Culloden of Bonnie Prince Charlie and is the mightiest artillery fortification in Britain, if not the whole of Europe. The entrance to the Cromarty Firth, with its deep waters carved over centuries by glaciers, is some 6 miles from the Point. This waterway leads to the port town of Invergordon, the most popular cruise ship destination in Scotland. It is not unusual therefore to see cruise ships come and go from a distance. And then there is the world famous Loch Ness which is less than an hour’s drive from Fortrose and which, according to mythology, is home to an elusive Monster…