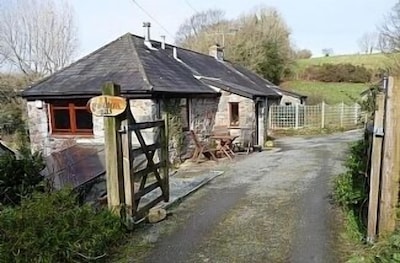 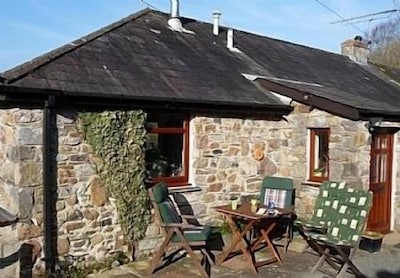 Converted Barn Between Dartmoor And The Beautiful South Devon Coastline

Barn in Avonwick, Nr. Totnes, Devon, England - This Pretty 19th Century Barn Overlooks A Farm And Out Across The Peaceful Valley Of The Horsebrook

Description of sleeping capacity: Sleeps 6 (3 Bedrooms) Notes on bedrooms: Main bedroom with double bed, bedroom 2 with twin beds and smaller bedroom 3 also with twin beds. Cot for baby is available on request. All bedrooms are downstairs in this up-side-down house.

The beautiful beaches of the South Devon are only 20 minutes drive away, sandy Bigbury and Thurlestone, pebbly Slapton and more comercial Paignton or Torquay. There are many small coves and cliff walks where it is possible to get away from people altogether.

By car - we are 1 mile from the Avonwick/South Brent turn-off from the A38 South Devon. Expressway (a car is recommended).

By train - we're 7 miles and a cab ride from Totnes main line station, served by fast trains from London, the Midlands and the North.

By air - Exeter airport is less than a 45 minute drive.

The barn is 5 miles from the historic town of Totnes with it's Castle and Guildhall and many places of interest and 5 miles from the pretty market town of Ashburton known as the gateway to Dartmoor. These local market towns boast a variety of individual shops from the quirky to the traditional. Within walking distance is the village of Avonwick with it's friendly village pub and beer garden; a shop selling local produce and an unusual little church.

As well as the village shop in Avonwick there is a good local butcher, baker, delicatessen and small Co-Op in South Brent (11/2 miles), a large Tesco just down the A38 at Lee Mill (7 miles) which can deliver here, along with many restaurants in towns like Ashburton and Totnes.

Helen was brought up in the farmhouse. She and her husband Peter bought the Barn in 2008 from members of her family.

The Barn was where we played in the hay as children and fed the young calves who were housed in the lower floor! It was converted nearly 35 years ago and now is sited in the peaceful valley I knew so well.