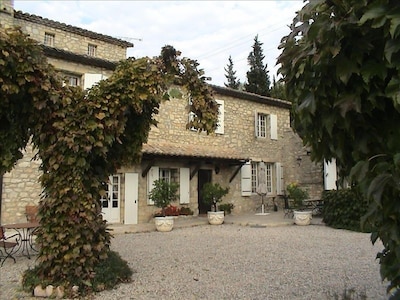 A Brief History: The owners of Mas des Patres, Bill & Gisele, bought this picturesque Mas in 1999. Bill is from the USA and Gisele originally from 35 Km away in Avignon. After meeting and marrying in 1994 we decided to leave the hectic pace of a New York lifestyle, take a year off and search for our second life. We found it in this beautiful Mas on 5 acres of verdure with dry stone walls and numerous fruit & olive trees in the lively, well located and friendly village of Uzes in the South of France.

Bill & Gisèle purchased this mas in 1999

Having grown up in nearby Avignon, Gisele is familiar with the area and wanted to be close to her family. When the opportunity to buy this beautiful mas presented itself we couldn't resist. The light reflecting off the old stone gives a feeling of being in an other era. With its location on the western slope of the medieval hilltop village of Uzes the Mas presents some spectacular and romantic sunsets over the Cevennes while dominating the valley with it's fields of bright yellow sunflowers, red poppies and vines. We have the feeling of being in the countryside while having only a short walk or ride(1Km) into town. Uzes has the advantages of a large town, with its many fine restaurants, shops and boutiques while retaining it's small town charm & medieval character. A location 20 minutes from the Pont du Gard, one of the most visited sites in France, makes it a popular year round destination. Uzes was constructed around an 11th century chateau still occupied by descendants of the first Duke and to this day retains the title of 'First Duchy of France'.

What makes this mas unique

We are in Uzès while not being in the busier downtown area. It is a short (less than 1km) walk to downtown for the incredible markets, wonderful shops and fine restaurants. Mas des Patres is a fully equipped family home.