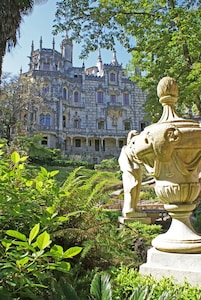 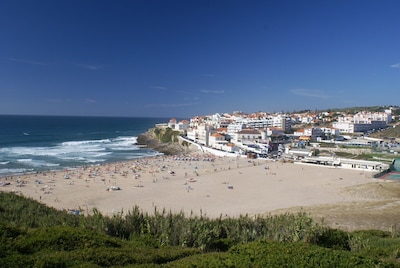 Lisbon Coast Cottages, founded in 2004 by Ana Mason-Correia and Ralph Mason, is made up of a small strong team. We (Ana & Ralph) are husband and wife. Ralph, English from Shrewsbury in the West Midlands and Ana, Portuguese who grew up by the sea in the outskirts of Lisbon before moving to London to pursue university studies, where we eventually met. Ana is a graphic designer by trade but now works remotely from home for an UK based company Wahanda, and Ralph, who was a senior quality control technician for a major radio-pharmaceutical company before the move to Portugal, now works for the properties full time. In the Portuguese side of the family were the 3 beach cottages in a very delapidated state, which we inherited in 2004. We instantly set to work rebuilding Casa da Olga from scratch whilst simultaneously doing a major refurbishment of Vila Arcos. They were both ready and we opened for business in June 2005. Soon after the London rat race became more of a drag than the stuff dreams are made of, so in a leap of faith we decided to renovate the 3rd cottage (Casa da Bia), move to Portugal and try and make a new better life in the sun. It was the spring of 2006. Subsequently we have poured blood, sweat and tears into Lisbon Coast Cottages, transforming it into a steadily growing and secure business. From the initial 3 beach cottages, expansion was started by the acquisition and refurbishment of another cottage in the heart of historical Sintra, which was sold in the Autumn of 2011 as we want to concentrate fully on the area around Praia das Maçãs do ensure the best quality service possible. As well as the owned properties, Ana & Ralph exclusively and comprehensively manage a 6 bedroom Luxury Villa with pool and sea Views called Casal de Santa Maria for it's owners Stuart & Sue Pearson who live in London, property number p88135 on this site.

ralph mason purchased this Cottage in 2004

Ana's grandparents built the cottages in the early 1950's, and they were used for family holidays for many years. Ana's Grandparents would stay in one cottage, and Ana and her Mother and Farther the other, Privacy for every one but the convenience of the family being just next door. When we inherited the cottages in 2004 they had been neglected for many years and required extensive modernization. We refurbished the cottages as a rental units rather than for our own use, so every thing was chosen to be the perfect blend of style, simplicity and durability. On arrival you will find the cottages exactly as in the photos, and the cottages areextremely easy to live in. When deciding on the name of the cottages, there could only be one choice ! the family names, Casa da Bia in memory of Ana's Granmother, and Vila Arcos the family surname.

Being simply the two of us on the management side of the company, you will be dealing exclusively with one of us every step of the way, from your initial enquiry through to questions, booking and payment. On arrival you will be greeted personally by one of us together with a nice bottle of wine and a basket of fresh local goodies to help you start off your holiday. We can, if you wish, also point you in the direction of all the best places to eat and places to go. We live just a few miles from the cottages and are more than happy to help should you need any help 24hrs a day. We have been renting properties in the village since 2005 and are building a brand, not just renting a single property and so take our guests requirements very seriously and any unforeseen problems are dealt with extremely quickly! A broken / damaged item remaining in a property is just not the way we work.