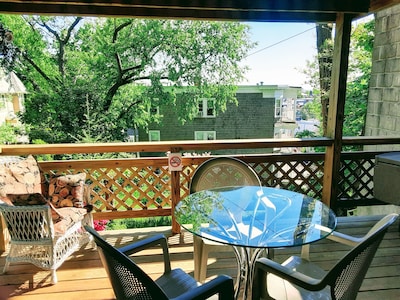 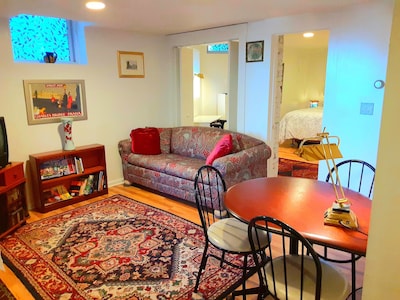 Welcome! I am a health psychologist and music therapist. I love living in Boston because it is near the ocean, has so many different architectural styles and parks and museums and musical venues and ethnic neighborhoods. I grew up in Italy and Africa, came back to the USA when I was 18 to go to Tufts University. Growing up, we were always hosting guests from all over the world, and we traveled a lot too and were hosted in our turn, with a kindness and warmth that meant the world to me as a child and teenager. So when I started renting out rooms in the house to travelers, a few years ago, my intention was partly to pass on some of that kindness and hospitality I had received. I look forward to hearing about your interests and plans for your trip, and to sharing ideas about things to do in Boston. I speak Italian and French as well as English, and can write and understand Spanish as well. I also have a translation app on my phone that allows me to converse with people in languages that I don't yet know. For example,. my assistant and I use it to converse in Chinese!

My great-grandparents bought this house around 1929 from the original owners, who built it in 1880. I bought it about 20 years ago from my great aunt, as I was going to university nearby. Generations of my family have lived here--medical people, engineers, meterologists, musicians and artists--so the upper part of the house is a bit like the Weasely's house in Harry Potter. full of fun Victorian touches, art, books, games and musical instruments. I also love the high ceilings, the ocean views and panoramic vistas from the windows, and the wood floors. Your apartment was created for my great-aunt, who needed a ground-floor residence all on one level. It has more modern feeling, with Japanese and Italian prints on the walls from her travels overseas.

The apartment you will be renting is newly renovated with wood floors, white walls with Japanese prints, wool rugs, and a glassed-in conservatory. It overlooks the garden and a long hillside, and you can see the ocean on the horizon from the deck and the dining area on clear days. We are less than half a mile from the Savin HIll subway station, a ten minute walk for most people through a safe area with restaurants, pharmacy, food market, laundromat and cafes. The beach is only a few blocks after the subway station, with tennis courts and playground nearby. The subway ride to the financial center of Boston is only ten minutes, the theater district is the next stop, and the stop after that is the beginning of the historic Freedom Trail, a self-guiding walking tour of Boston's revolutionary historic homes and meeting places. Go a few more stops and you are in the medical and high tech areas around MIT, then in the fun and hip Harvard Square. We also have bikes for you if you want to explore the bike trails near out house, which go to the John F. Kennedy Museum as well as to Carson Beach, Castle Island and South Boston. One thing that people have commented about is how much quieter it is at my house than staying in the city center. You are only ten minutes from the city center by subway, yet with the greenery and quiet of a suburb.