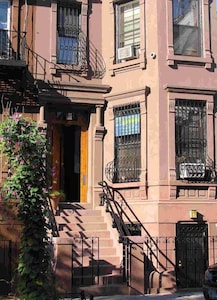 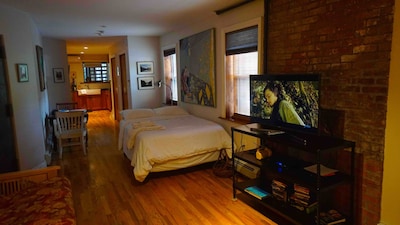 We are an award winning journalist who writes about travel, food, wine and design for high end international publications such as 'Travel+Leisure,' 'Wine Enthusiast' and 'Premier Traveler,' and an Emmy Award nominated cinematographer who shoots feature films, TV series and commercials. As our work has taken us all over the world we welcome foreign visitors.

This flat is part of an authentic Manhattan neighborhood, near Columbia University, 20 - 30 minutes by public transport from New York's cultural and business institutions.

What makes this Hotel unique

Architecture buffs will find uninterrupted blocks of restored century old brownstones by renowned architects such as McKim, Mead & White. We are near one of a kind cultural institutions such as Columbia University, the Maysles Independent Cinema, live theater at the City College Gatehouse, and the Apollo Theater. Yankee Stadium is 20 minutes by public transport.