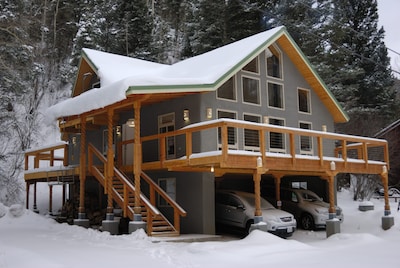 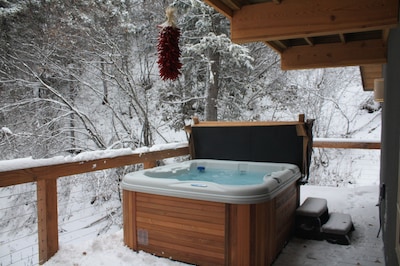 Worth and Mary Nell, the owners of Casa de Toro, are siblings and long-term aficionados of Northern New Mexico. While we were growing up in Amarillo, TX, our family spent many summer vacations in the cool, clean air of the New Mexico Rockies. Our captivation with the Taos area continues to today even though Worth and his family live in Austin, TX and Mary Nell and her family live in Nashville, TN. We get to Casa de Toro as often as we can during the year and consider the casa to be our 'home away from home.'

Kayta Tracey purchased this Chalet in 1970

The story of Casa de Toro began in 1969 when our parents found the perfect place — the Taos Ski Valley — to build their long-sought cabin 'in the mountains'. Construction began in 1970, mostly performed by our dad with help from Worth when he was home from college. Named after the Bull-of-the-Woods meadow near Mt. Wheeler, Casa de Toro was a family retreat from the hot, dry summers of our home town Amarillo, Texas for 34 years. In 2006 after inheriting it, we decided to remodel and enlarge the cabin. As we delved further into the remodeling process we realized that the cabin was in need of some extensive updating. Construction began in the summer of 2008 and was finished 18 months later. Casa de Toro has had a long, distinguished, and loving 40-year history with our family. Today, our two families are the proud, second-generation owners of a place that is in its second life. While our parents are not here to see it, we know that they would really like what we have done and we hope you do, too.

What makes this Chalet unique

For us, Casa de Toro has always been the perfect place to relax, fish, and enjoy the beauty and mystique of Taos. We have also used it as a 'base camp' for sightseeing and day-long excursions to other parts of New Mexico.