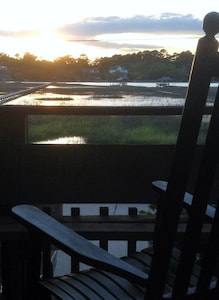 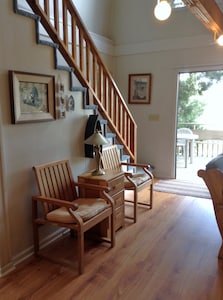 queen
Shares a balcony with other bedroom. Limited ocean view.

queen
The most accessible. Close to kitchen and living area.

single (3)
Great for kids, this loft has marsh view + an open feeling.

I grew up in Greenville SC Where I graduated from GHS and Furman University . After graduation I taught high school math and science in Charleston before marriying and moving to Georgetown, SC. My husband and I had 2 children. After his untimely death I became a New York Life agent retiring in 2000. At 54 I started taking cello lessons and currently play in 2 orchestras. I am a “member with excellence” and former president of the South Carolina Watermedia Society. I am currently married to a retired Lutheran pastor. We are the grandparents of 7 grandchildren and divide our time between Georgetown and Asheville, NC

Nancy Bourne purchased this House in 1981

My family has been coming to Pawleys since I was a young child. I learned “early on” what a special place it is!