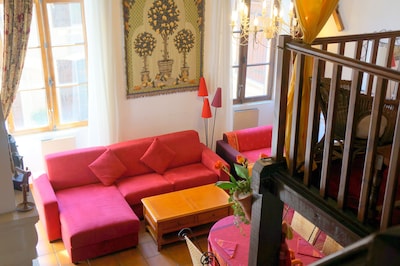 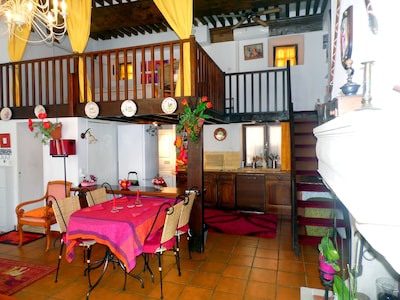 Beautiful apartment in historic residence in the heart of Roman Languedoc

Ideal for one person, a couple, or a small family (sheets & towels provided)

The apartment is essentially one very large space, with enormous volume (4-metre-high ceilings). Wooden stairs lead to the sleeping loft with its very large bed (180 cm, extra-large king size). The sleeping loft has two windows giving onto the street, two bedside tables, a low table, an armchair, and a ceiling fan, as well as a large closet with shelves and plenty of space for hanging clothes.

Check in after: Flexible
Check out before: 10:30 am

The apartment could not be more central! Two minutes in one direction, and you are at the Cathedral St. Just, next to the town square. Two minutes in the other direction takes you to the Canal de la Robine, a tributary of the Canal du Midi, which flows through the heart of the city, and on whose banks are too many restaurants and bars to count. Another 2 to 3 minutes on foot and you'll be at Les Halles--one of the largest and best covered markets in France. Finally, 3 minutes in still another direction will take you to the Place de la Révolution/Léon Blum, with its park and restaurants.

If travelling by train, the Gare de Narbonne is so close (10-12 minutes by foot) that one never needs a taxi.

We manage the property ourselves, and take seriously our responsibility to provide a our guests a place of respite that is beautiful, calm, well-equipped, and very clean. Guests coming from this site have left three nice reviews in English, and there are a couple of other reviews on the other site we use:

Laura RHODES purchased this apartment in 2005

To tell you a little about ourselves, we are an American couple living in France since 2000. In 2004 my husband's mother died, leaving him a small inheritance, and he wanted to find us a "second residence" in France. I chose Narbonne simply by chance -- I had changed trains there twice en route to Barcelona -- and within two hours of arriving in the city we were shown this apartment. It was love at first sight! We signed for the apartment the next day, and took ownership in February 2005. We've been renting it to vacationers -- both short and long-term -- since the summer of 2006. In 2010-2011 we lived in the apartment ourselves for nine months, and for that reason especially it is extremely well equipped! (We installed the air conditioning then, too.)

If you wish to spend your vacation in complete comfort (A/C and heating both work extremely well!), just a minute or two by foot from several good restaurants, cafés, bars, and historic monuments, you will be very happy in "La Brigade". Moreover, Narbonne is well situated to take off for one of the two beautiful Mediterranean beaches, bicycle along the canal, or to explore "Cathar country". The apartment is only 10-12 minutes by foot from the Gare (train station) de Narbonne, from where a short train ride will take you to Montpellier, Sète, Agde and Beziers to the North, Carcassonne and Toulouse to the West, and Perpignan and Collioure to the South. Now that the Spanish AVE trains are in service, it's even possible to do Barcelona as a day trip... although it's such a fabulous city that I would recommend spending two nights there minimum!