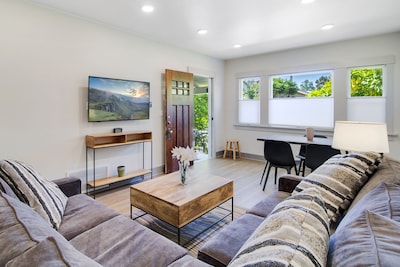 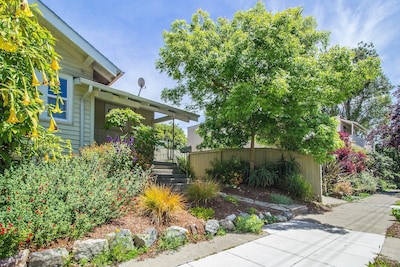 Under California’s Regional Stay Home Order, non-essential travel is currently unlawful in many parts of the state. We encourage you to learn more about restrictions that may be in effect at your destination before booking.Learn more

BEDROOM 1 - Queen size Bed sleeps 2 - fitted with organic cotton sheets - windows in bedrooms have blackout roller shades BEDROOM 2 - Double Bed (Murphy Wallbed) sleeps 2 - fitted with organic cotton sheets - blackout roller shades on window OTHER SLEEPING OPTIONS - A twin sized air mattress could be used in the house. Either placed in the larger bedroom or in the main living space. And in a pinch, if needed, someone could sleep on the sofa (only 1 'not very tall' person because the sofa does not fold out)

A Little Information About Berkeley:

* The main feature of Berkeley is the University of California at Berkeley campus (Cal) which is known world-wide. The campus was the birthplace of the Free Speech Movement in 1964.

* Berkeley is a beautiful town with lots of interesting craftsman architecture. It has a superb mild climate and beautiful geography (where something is blooming every month of the year).

* From the town there are spectacular views of San Francisco, the bay, and the hills of Berkeley.

* Because of Berkeley´s central location, it can be used as a based to explore San Francisco (20 minutes), Napa/Sonoma (1 hour), the Marin Redwoods (45 minutes), Santa Cruz (1.5 hours), and all of the San Francisco Bay area.

Parks Near to the McGee House:

* Berkeley has many parks

* The parks that are closest to the McGee house are:

* About 1.75 miles from the Clark Kerr Campus located at the University of California at Berkeley

* About 4 miles from Mathematical Sciences Research Institute (MSRI) in Berkeley

* About 10 miles from Mills College in Oakland

* Many shops and restaurants within .5 miles around the house

Mark lives about 15 blocks from the McGee House, and provides management to all guests of the house. He also works in the information technology arena, as well as in culinary services. Mark has lived in Berkeley since 2000. Mark has stayed at multiple 'short-term furnished' vacation-style housing at many places in the USA, as well as in Europe. That has been great for learning what is important to travelers/visitors.

Mark Foy purchased this house in 2005

Mark purchased this house in 2005 to provide comfortable housing for people visiting Berkeley (including visitors to UC Berkeley). Visitors at that time had very few options for furnished short-term housing; there were plenty of housing options which were unfurnished, and required a 9 month lease (where the leaser had to setup their own utilities, etc.), but other than expensive hotels (which generally do not have kitchens, etc.), there were very few other options.

I love the McGee House for it's remodeled look, comfortable furnishings, quite neighborhood, yet still close to many of Berkeley's best offerings, as well as the private/fully landscaped back yard which is wonderful for enjoying our sunny California days.