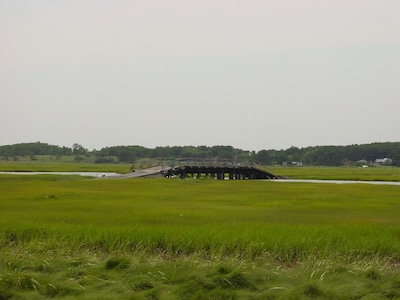 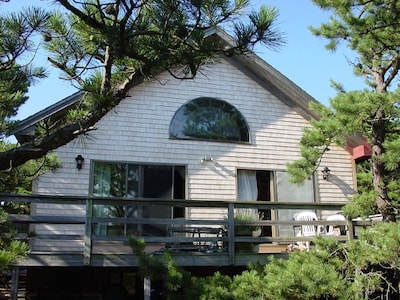 Two bedrooms are located on the main floor, while the loft has a king bed and double futon.

The house is located on Lt. Island in South Wellfleet, Massachusetts. Provincetown and Truro are just North from the house, while Flea Markets and Orleans are located to the South. Whale watching is best from Provincetown, while the biking is best from Wellfleet going South. The Island is located on the bay side and surrounded by the Audubon Sanctuary. There is wonderful boating around the island at high tide.

Other Activities: Canoeing and kayaking.

I was born and raised in the Adirondacks of upper New York state. After graduating from Cornell Veterinary College, I practiced in Wyo, NY, VT, SC, Tortola, and Ma. I also taught at Delhi College and Newberry SC in their preveterinary programs.

Foster Palmer purchased this house in 1985

I was practicing in Vt from 1974 to 1993 and needed a place to relax away from phones, TV, and work. My home now has a phone, cable, TV, and internet so the days/weeks of playing cards and just walking the beaches are diminished but not gone.

Lt Island is considered exclusive now and is ringed by Audubon. The beaches on the island are private and one can walk pets there if they are leashed, even during the peak summer season. The piping plovers and diamond back terrapins nest on the island so animals must be leashed during the summer nesting season.