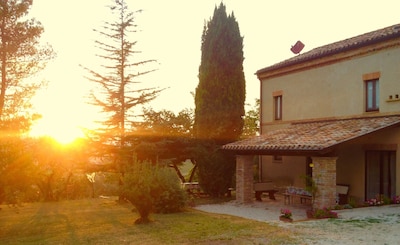 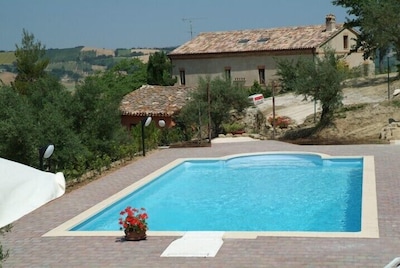 Il Castellano, a beautiful Italian villa set in its own grounds/woodland

There are 10 bedrooms, 7 on the first floor and 3 on the top floor, beneath the roof. During July and August, these top bedrooms can get hot, and so what people tend to do (if needed) is to move the single beds down into the 1st floor bedrooms, or into the larger of the sitting rooms on the ground floor, which has a bathroom close by.

Half an hour by car in one direction takes you to the sun kissed beaches of the Adriatic, and in the other to the foothills of the Sibillini Mountains, which offer both simple excursions and more serious rock-climbing. All of the towns and villages nearby are rich in castles, fortresses, churches and abbeys, and are witness to their medieval origin (Castello delle Rancie; Castello di Caldarola; Abbazia di Fiastra).

15 mins by car takes you to the Roman ruins of Urbs Salvia.

The city of Macerata, 20km away, hosts opera and classical music festivals annually in its famous Sferistereo.

To appreciate the local culture and traditions, there are numerous festivals throughout the year, which take place in the surrounding villages. This is also a great way of trying local products and traditional cuisine.

Ask a question
Member Since 2002
Gabriel Walsh is a Premier Host·The owner or manager of this property consistently provides great experiences for their guests.