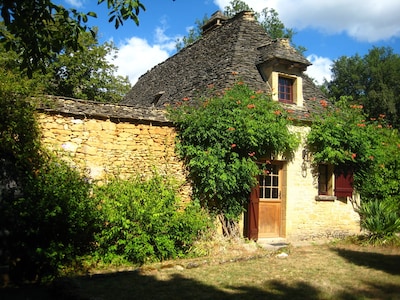 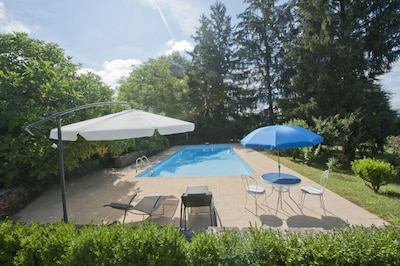 Ask a question
Member Since 2015

The Périgord Noir Region is full of architecturally fascinating buildings, all nestling in the hills and valleys of the two rivers, the Dordogne and the Vézère, that meander through it. The village of Thonac is on the Vezère, a charming river described by the famous travel writer Johnson, as 'The Dreaming Vézère, which winds its way through ancient settlements and whose valleys are now famous prehistoric sites. From the canoe hire station within walking distance of the house, float down and experience the unique sight-seeing tour from the water, stopping at several fascinating places en route. St Léon sur Vézère (3.5 km by road) listed as one of the most beautiful villages in France, is set in the curve of the river. Wander through its narrow meandering pathways with their stone houses, many still retaining their traditional stone 'lauze' roofs and see its 12th Century church and imposing château. Or relax and stop for a drink at one of the riverside cafés. From St Léon, continue on to La Roque St Christophe, one of the largest prehistoric rock shelters in Europe which later became a troglodyte fortress and stop to take a tour of this hanging settlement that was home to hundreds of people. Carry further on down the river and you will come to the dramatic village of Les Eyzies-de-Tayac (18km by road), a world heritage site and world centre for prehistory. The highest concentration of prehistory sites is here and this is also home to the National Museum of prehistory, where one of the largest collections of fascinating prehistoric relics can be seen.

The cottage and the manor are constructed in the local golden limestone with traditional stoned-tiles 'lauze' roofs and stone window surrounds, typical of the old local architecture. It is set in 1.5 hectares of land with trees and flowering shrubs and has lovely views to the surrounding wooded hillside. A real feast for the eyes.