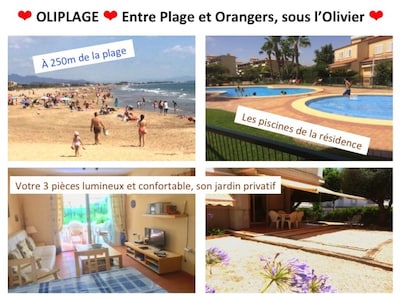 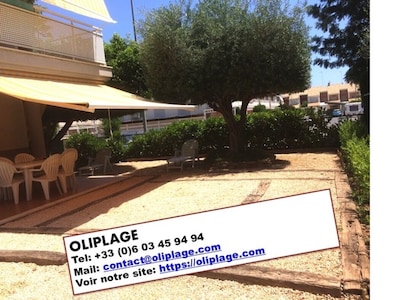 A large room of 13 m2, with double closet (Dresser drawers + wardrobe), equipped with a bed of 150x200 (large pillow), two nightstands and a rocking chair. A smaller room of 9 m2, with wardrobe chest of drawers, wardrobe), equipped with 2 beds 90 * 200 (small bolsters), a bedside table. Both bedrooms are equipped with double-glazed windows, closed by a roller shutter, and also benefit from roll-up blinds. The rooms are equipped with:        - For the double bed, a blanket and a duvet,       - For 2 single beds: 2 blankets - 1couette Sheets and bolster cover are provided as well as towels and bath towels. Beach towels are not provided. The great room has a flat screen TV and a satellite receiver. It enables the reception of French and Spanish channels. The living room contains a sofa given for 1 person.

The rental is located in CANET DE BERENGUER (region of VALENCE), 200m from the marina and the beach (large sandy beach). CANET DE BERENGUER (in Castilian), CANET D'EN BERENGUER (in Valencien) is a small town in the north of the province of VALENCE. The old village is 2Km inland, but the tourist part has developed by the sea. This area, mainly dedicated to leisure accommodation (maximum 3 floors), includes restaurants, local shops and two medium-sized areas, gardens, play areas, etc. The Municipality touches that of SAGUNTO, the tourist part of which (PUERTO de SAGUNTO) is in direct contact (separation by a bridge) from the seaside area of CANET. PUERTO de SAGUNTO is fully supplied in Bars, Restaurants, Nightclubs, and lives both day and night.

CANET EQUIPMENT The CANET beach (very wide) is one of the few fine sandy beaches in the VALENCIA region. The low slope makes it a safe beach. It is possible nearby to find some rocky bottoms to practice scuba diving. CANET DE BERENGUER has a large marina. The Commune is also equipped with all sports equipment, including an indoor swimming pool.

VALENCE (VALENCIA) Capital of the province and third city of Spain, deserves visits for several reasons:

- The old town, the cathedral, the Carmen district, allows you to stroll amidst the superbly restored old stones;

- Modern neighborhoods including that of the City of Arts and Sciences, of futuristic architecture which, in addition to the museum of the same name (city of sciences), includes a large auditorium, Palace of Music, hanging gardens and the largest aquarium Europe

- Parks and Gardens: The entire bed of the Turia river, which crossed Valencia and which was diverted some thirty years ago, is converted into parks and sports grounds.

SAGUNTO, The old town of SAGUNTO (6km from CANET) is one of the high places in the history of Spain. It is crowned for several kilometers by the ruins (Roman then Arab) of the fort which defended this essential place for the region (epic of the Cid). The nearby Roman amphitheater provides many quality shows. From the top of the old town, you can see the entire coastal strip, mainly devoted to the cultivation of orange trees.

THE FESTIVALS: In addition to the local festivals which in all seasons animate the villages of the region, it should be noted in particular the Fallas of VALENCIA which each year from March 15 to 19, see building hundreds of ephemeral cardboard monuments which will be burned the last day.

GASTRONOMY The paella Valenciana is no longer to be mentioned. The fidéua (which looks like a paella in which rice has been replaced by small noodles), but with a completely different flavor (made entirely with fish), is also worth a detour.