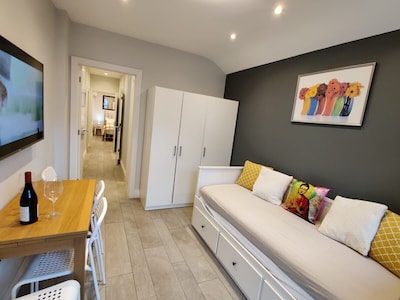 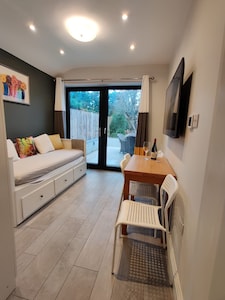 We are a family of 4, a couple with two kids aged 18and 16. My husband and I are professionals working with Blue Chip companies/ MNCs for long years, have lived in 4 countries and travelled to many. Hosting a vacation rental is just an extension of our love to travel and meeting new people, from different cultures and places.

AJ purchased this House in 2017

Pinner is considered to be the beautiful and leafy suburb of the London Borough of Harrow, with wide tree-lined streets, a conservation area, large houses and flat conversions in attractive Edwardian buildings. With a clutch of fine timber-framed buildings, Pinner High Street, a remarkable survival of a medieval village, is also a café culture hub and a star in its own right, so picturesque that it is often used as a filming location. Eddie Redmayne was spotted there shooting the Stephen Hawking biopic The Theory of Everything, for which the young British star scooped this year’s best actor Oscar. Considered the wealthy side of the London borough of Harrow, Pinner has a strong sense of community, with four key events each year. There are celebrations in April for St George’s Day, then comes Pinner Fair in May — granted charter status in 1336 by King Edward III — the Pinner Village Show in Pinner Memorial Park on the second Saturday in September, and Pinner Pantomime Evening, on the last Thursday of each November. Pinner also has the lowest crime rate in the whole of London, with several independent schools and single-sex schools with a prestigious reputation, making it a popular area for affluent families. The historic town of Pinner is both a religiously and culturally diverse area

Travel: Pinner Underground station is on the Metropolitan line in Zone 5, and it’s a 25-minute ride to Baker Street. From our place. You can walk to the pubs, restraunts, cafes, tube station, nearby supermarkets. Its a very safe area to walk around and to get to London, Pinner also has the lowest crime rate in the whole of London. Pinner has an array of large houses situated on quiet leafy roads, and is a family area near tube, which makes it very unique, safe for families and travellers.