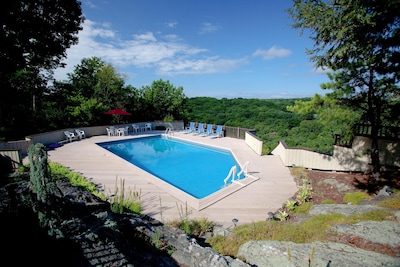 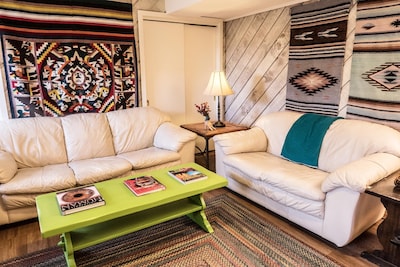 "Not all who wander are lost." Although we have been occasionally accused of not being able to find our place, we always come back to Connecticut! Oh, a grandchild is a powerful magnet and the reason we bought this amazing property. We are a photographer -- writer/producer team about to embark on our next project once we put the finishing touches on our home renovation. The latter isn't progressing as quickly as it might as we are easily distracted just enjoying this wonder property!

Pat purchased this Apartment in 2014

Well, porches, decks, balconies, woodlands, rock outcroppings, spectacular views, parading wildlife, a sense of seclusion, and 40 solar panels; who could ask for anything more? Oh, the lowest taxes in Fairfield County and being 10 minutes from 99% of everything we need (including our granddaughter) doesn't hurt either! Did I mention the swimming pool with it's hidden under-deck? Trés cool. Well, we recall the adage that you never want to own the most expensive house in a neighborhood, but just maybe that is why we could afford it in the first place!

I think I've somewhat covered the unique benefits, other than the flexible layout which was extremely conducive to our plans which are somewhere between totally unknown, and those that often change over night. It also was a challenge to cure all the faults that had been somewhat intentionally built in to the property. Like the fact that the only way to the garage was through the apartment; and that the backyard was really in the front yard meaning mud-caked children had to enter through the formal vestibule rather than a proper but non-existent back door. And, in fact, that all manner of icky or heavy things had to take a rather long and strenuous journey just to get inside the house through any of its many doors, all of them placed for graceful living rather than practicality. So there you have it. We're still grappling with what to do with the toilet in the under-deck and an upstairs foyer the size and shape of a good-sized master bedroom, but it's all good.