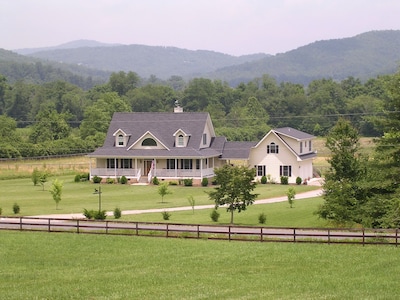 Homestead Farm South is named after Ken's ancestral home in Connecticut, Homestead Farm Dairy. When Ken and Kim moved to the mountains of North Carolina, they decided they would do something unconventional for a couple that had lived in the suburbs; they bought farm land and built Homestead Farm South. Ken wanted bison, Kim wanted goats, so they have goats, as well as a horse, chickens, turkeys, and a donkey.

Ken and Kim spent many months looking at properties, and they fell in love with the Little River valley area. Ken found this property when a colleague at work told him friends of his had property for sale, and when his coworker took him to show him the property, it was exactly where he and Kim had said they wanted to live.

Kim found the house plan and they made some changes to make it, including adding the apartment over the garage. Originally intended for visiting family and friends, or for a future Brevard College student willing to live there in exchange for helping out, they decided to try using it as a vacation rental at the encouragement of their contractor and with the assistance of a nearby B&B. It was a decision they have not regretted because they have had many wonderful people stay there through the years