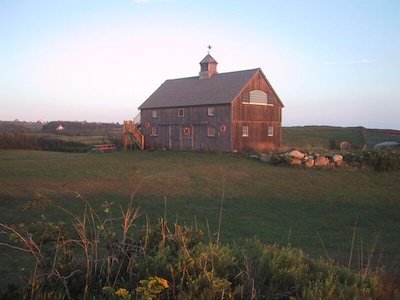 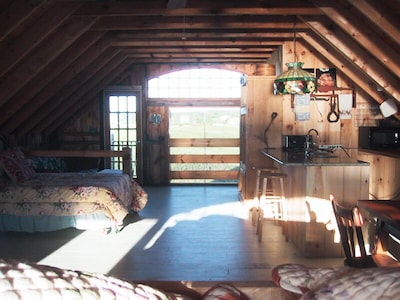 We inherited this 10 acre property from my husband's parents who bought it in 1946. The original house was built in 1840 and we have added on to it, doing all the work ourselves. We are both artists; Sean is a sculptor of stone and Leslie does reliefs in terracotta/majolica. We live 6 months in our house on the property (May-November) and 6 months in Pietrasanta, Italy (November-May. We built the Barn in 1997.

Leslie Hartnett purchased this Barn in 1946

Sean's family bought the property because they fell in love with Block Island and with Schooner Point in particular. They felt it was very like Ireland with its brilliant blues and greens and its rolling stone walls. They chose this particular spot because it was far (3 miles) from the more populated parts of the island and because it was so near the ocean. In 1946 there was much to choose from but Schooner Point won their hearts.

No matter how crowded it gets in the summer on Block Island, it's always peaceful at Schooner Point.