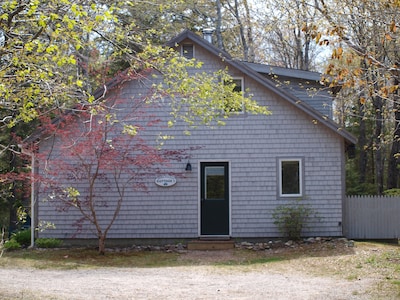 single (2)
First floor, view of lake and shoreline in Acadia

King size beds (1) In Master Bedroom., Twin or Single Beds (4) Two twins in each of the first floor bedrooms. Kit and linens to make set in front bedroom into a King bed., Baby Cribs (1) There is a 'Pack N Play in each cottage., Sleep Sofa or Futons (1) Double size futon bed in loft of Cottage 2. Twin mattress and springs in loft of Cottage 1.

I'm a summer kid who fell in love with Mount Desert Island and lived there year-round for 15 years. After many years and many travels, I still think of it as home. My first novel and sixth book, 'Islands of Time,' is set on Mount Desert Island. Linda Greenlaw, NYT best-selling author said, 'I really like it. It's a love-song to the people and landscape of Maine.' The sequel "The Other Island: Ben's Story" was published in 2017, and I'm proud that Greenlaw and other fine authors have liked it as well.

Barbara Lawrence purchased this House in 1982

I was attracted to this property, formerly a hunting and fishing camp, because the ad boasted abundant wildlife. When I first saw Hodgdon Pond Farm, I realized proximity to Acadia National Park gave it enduring protection and privacy, and yet it was convenient to everything else on the island.

I love reading in the hammock beside the lake, and listening to the sounds of the birds and animals - the trill of tree frogs, keening of loons, and the querulous calls of osprey that always sound as if they are trying to get children off to school. Sometimes I hear a beaver slap the water with its tail, and sometimes ravens loudly scolding an eagle. The bullfrogs, Kingfisher, and warblers add to this ever changing, ever fascinating serenade. I also love sitting in one of the Adirondack chairs near the Little Ponds. The last time I was there I watched a mother duck and four very small duckings paddling to the bridge with the beaver dam. When they got very close a mink lunged out from under the bridge - but missed them all. Another time I was weeding the garden between the ponds when an otter stood up about ten feet from me, clutching a frog in its paws, which it then crunched as it rested in the culvert. These experiences carry me through a long winter!