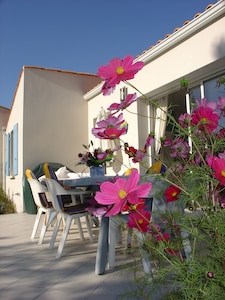 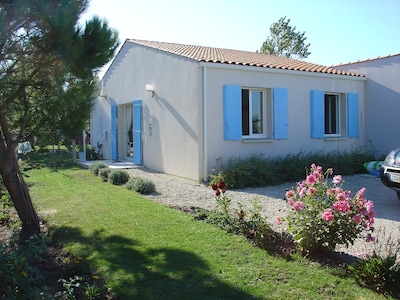 the rooms are bright, quiet place children's playground in one of the rooms the mattresses are recent + 2 years + mattress topper buy in february 2015 pillows, blankets, duvets, bedspreads mattress protector in all rooms baby bed, purchase in 2017 IN ALL ROOMS THERE IS A MOSQUITO wardrobe closet in all rooms

The island of Oléron is an island rich in diversity. You will discover a wild nature,

With its 100km of coastline and its many white sand beaches on the wild coast of the island.

On the opposite side is the oyster park area, salt marshes.

It also offers forest landscapes, located in the south of the island, with the forest of Saint Trojan les Bains

the island enjoys an almost Mediterranean climate, with mild winters, warm summers refreshed by the wind

It is also an exceptional playground for the practice of sport (cycling, hiking, water activities ....)

the beautiful sandy beaches are numerous and very extensive

His gastronomy is tasty.

To eat cheap, there are small restaurants all over the island with dishes of mussels, oysters, shrimp, fish

another wealth of the island is its impressive military heritage.

To visit also on the island:

The fishing port at La Cotinière.

the Chassiron lighthouse and its cliffs

the citadel of Oleron castle and the oyster port, Sunday market

For nature lovers, visit the marshes to birds in Dolus.

To Saint Trojan, a small train ride to discover the southern tip of the island

The port of Salines where the villa is located is a port where you can explore the salt marsh. You will discover all the salt culture and its environment

On the site, a quality restaurant will welcome you from April to October

On the continent To see:

Marennes and its museum

the quake for its many restaurants

the zoo of the palmyre

In Rochefort: the Royale ropeway and the Hermione boat, the ferry, the house

Pierre Loti, the museum of the Navy

the port of La Rochelle and its city center

the tip of the smoke in Fouras

the island of Aix

the big beach of chalet and its casino;

Ask a question
Member Since 2004
JEAN-JACQUES is a Premier Host·The owner or manager of this property consistently provides great experiences for their guests.