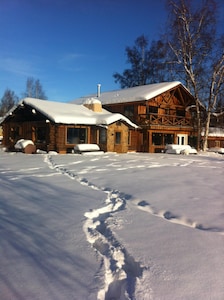 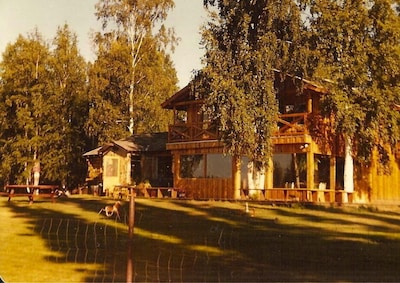 Comfortable House With Kitchen On The Chena River. Family Friendly.

The House Is Located On 3 1/2 Acres On The North Side Of The Chena River.

Hosted by Martha and Robert Roth

About Martha and Robert Roth

In January of 1962 my husband was drafted out of a general practice residency in Sacramento and sent to Ft. Wainwright. At the time we had two small boys and I was teaching half day kindergarten. I had to give notice so we didn't arrive until March. Originally we paid our way up so we wouldn't have to stay longer than 18 months. We then extended so that we could live on post. Meanwhile, my husband fell in love with the hunting and fishing so we extended until they finally told him he had to either get out of the Army or take another assignment. The Army would give us a free move back to Oregon, our original home, within a year. So, we moved to a little one bedroom house on five acres. By then we had three boys so built a triple level, youth size bunk bed for the kids and slept in a hide-a-bed in the living room. The year ended and we're still here. Bob practiced family medicine until retirement. Early on he learned to fly and had many adventures in his Super Cub. He completed the Yukon 800 boat race 6 times and won once. Now that he can't do these things, he raises bees and we play duplicate bridge. While Bob was busy working and playing I had time to get into trouble on my own. I quit teaching after my first year in Alaska and loved staying home with the kids. A neighbor and I once started a booth at the Fair to sell spaghetti for the swim team. It turned out to be a 15 year commitment, The Farmhouse Cafe, that served everything from hamburgers and Hunters Stew to eggs the chickens laid in their cages. When the last two children were in high school I took a class to become a realtor. This seemed interesting, especially since an older son who taught in the Bush was moving to Fairbanks with his young family and would soon be needing a house. They bought the first one I showed them. About 20 years ago I bought an 8 unit efficiency apartment with another son because of the real estate connection. Many more stories but out of room

Martha and Robert Roth purchased this House in 1969

While we were living in the little house a neighbor came to collect money for another neighbor that plowed the snow. When they went to California to get braces for their daughter they asked if we would like to rent their bigger house. So in 1966 we moved. The next summer there was a big flood. The basement was filled with water and there was 10 1/2 inches in the living room. They owned the lot next door and wanted to build their dream house there so we negotiated to buy the house. They borrowed money on this house to finance the new house so, though we agreed on a purchase price, we paid rent until the financing on their new house was completed. Then we bought it. It's a wonderful place to live.

It is close to town and the University. The location on the river is a delight. Through the years there have been dozens of picnics at the river. Last summer our daughter had her 20th high school reunion, and of course the picnic was here. They picked up canoes and kayaks from Pioneer Park to add even more fun. It is casual and homey. We put new carpet in the upstairs last year. It has a big garden and lots of privacy.